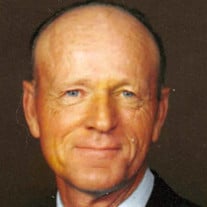 Albert Eugene “Gene” Renfro, 88, died Tuesday, January 28, 2020 at Stevens County Hospital in Hugoton, KS. He was a lifetime resident of Hugoton. He was born on July 19, 1931 in Hugoton, the son of Mark and Vida (Foster) Renfro. He graduated from Hugoton High School in 1949. On October 12, 1952, Gene married Treva Louise Paden in Hugoton. She preceded him in death on June 30, 2016. Gene served in the United States Air Force from 1951 to 1954, where he rose to the rank of Staff Sergeant. After his service, he returned home where he farmed. Gene was a resident of Pioneer Manor for many years, where enjoyed the many activities and friends he made there. Gene was a member of the Hugoton First Christian Church. Survivors include: Son Shawn Renfro Hugoton, KS Granddaughter Cassondra Renfro Grand Junction, CO Sister Shirley Brown Nixa, MO Gene was preceded in death by his wife, Treva, his parents, son Rod Renfro on January 11, 2020, brother Maurice Renfro, and sisters Dorothy Mitchell and Marilyn Wilson. Memorial Services will be 2pm Friday, June 19, 2020 at the Hugoton First Christian Church with Reverend Heath Kelley presiding. Private family inurnment will take place at the Hugoton Cemetery at a later date. Condolences may be sent to the family at www.brennemanfuneralhome.com

The family of Albert Eugene Renfro created this Life Tributes page to make it easy to share your memories.

Send flowers to the Renfro family.