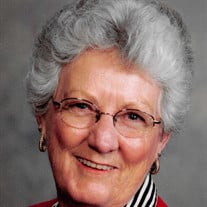 Ann Kilgore, 79, died on January 6, 2017, at Southwest Medical Center in Liberal. She was born on July 24, 1937, to Harold and Irene (Baird) Forbes, in Liberal, KS. On January 7, 1955, she married Freddie Kilgore in Clayton, NM. He preceded her in death in 2011. She graduated from Liberal High School in 1957. She lived in Liberal, Lincoln, NE, Jackson, MS, and Hutchinson, KS, before moving back to Liberal. She was an active member of the 1st United Methodist Church, a volunteer for the SWMC Auxiliary, the VFW Ladies Auxiliary, and member of the LHS Red Hats. She enjoyed quilting, sewing, crafting, gardening, cooking and spending time with family and friends. She worked for 24 years at the Seward County Treasurer’s Office, where she retired as Deputy Treasurer. Survivors include: 1 son Ken Kilgore and his wife Sheila Liberal, KS 1 Daughter Theresa Gibbs and her husband Tony Noblesville, IN 1 Brother Bob Forbes Bridge City, TX 3 Grandchildren Eric (Heather) Gibbs, Haley (Joshua) Deenik, and Kenny (Kacie) Kilgore. 7 great grandchildren. She was preceded in death by her parents, her husband, and infant son Ronald Kilgore. Cremation has taken place, and a memorial service will be held at 10:00 am Saturday, January 14th at the 1st United Methodist Church with Pastor Keith Anglemeyer presiding. Burial to follow at Liberal Cemetery. In Lieu of flowers, the family requests that Memorial Contributions may be sent to the St. Jude Children’s Hospital, in care of Brenneman Funeral Home, 1212 W. 2nd St., Liberal, KS 67901. Condolences can be left at www.brennemanfuneralhome.com.

The family of Ann Kilgore created this Life Tributes page to make it easy to share your memories.

Send flowers to the Kilgore family.