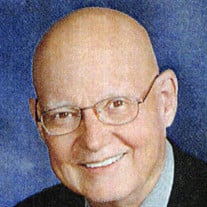 Carl Roy Windsor, 73, died October 18, 2020 at Southwest Medical Center in Liberal, Kansas. He was born October 27, 1946 to George Lee and Anna (Kroeker) Windsor in Liberal, Kansas. He was the only sibling that was born at Epworth Hospital, his brothers and sisters were born at home. Carl was a 1964 graduate of Turpin High School and graduated in 1968 from Northwestern Oklahoma University in Alva, Oklahoma. Carl served in The United States Army and was deployed to Vietnam where he learned to play the organ and served as a chaplain’s assistant. He worked at Beech Aircraft and was employed for many years in banking at both Peoples National Bank and Bank of America. Carl enjoyed music, he played the piano and organ in several churches around the Liberal area and enjoyed attending concerts with his sisters and nieces. He preferred Hymns of old. He took great pleasure in sharing his talents at weekly programs in assisted living facilities. He also enjoyed researching genealogy and for a time owned Duke’s Antiques. Carl took care of his elderly uncle, Chester Windsor, as well as his sister in law Roberta Windsor. He always remained remarkably close to his family. Carl was a member of Fellowship Baptist Church of Liberal, Kansas. He is survived by two brothers: Sam Windsor and his wife Sue of Corpus Christi, Texas. Lester Windsor and his wife Bobbie of Griffin, Georgia. Two sisters: Ruby Harrington of Turpin, Oklahoma. MaryAnn Bush of Elkhart, Kansas. He was the uncle of Michael Bush, Phillip Bush, Nancy Morrison, Susan O’Brien, Lorie Harrington, Marilyn Maris, Pam Millis, Vicki Pasque, David Thrasher, Lisa Wertz, Warren Windsor, Michelle Dixon, Jeffrey Windsor. Carl was preceded in death by both parent’s, brother Lowell Windsor, sisters Joyce Thrasher and Dora Windsor, nephew Paul Harrington. Visitation will be on Friday, October 30, 2020 3:00PM – 7:00PM. Graveside Service will be Saturday October 31, 2020 at 11:00AM at Independence Cemetery in Turpin, Oklahoma with Pastor Tyler Prater presiding. Both Visitation and Funeral Service will follow CDC guideline requirements. All guests will be required to wear a mask, practice social distancing, and please do not greet, hug, or shake hands with the family during these difficult times. Memorial are suggested to Fellowship Baptist Church in care of Hornung Family Funeral Home 1212 W. 2nd St. Liberal, KS. 67901 Condolences may be sent to the family at www.hornungfamilyfuneral.com

The family of Carl Roy Windsor created this Life Tributes page to make it easy to share your memories.

Send flowers to the Windsor family.