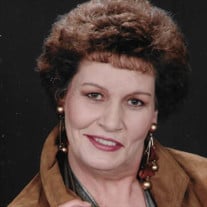 Carolyn “Carol” L. Warren was born Carolyn LaWanda Burnette - yes, a famous name but no relation... she was born 3 days after Christmas (12/28/1942) to Velma Lenora Pierson & John W. Burnette. She became the baby girl of a very large family in rural Monticello, Arkansas, Drew County. Carol, age 78, passed away Wednesday morning at 8:30 am at Fowler Residential Center, Fowler, KS in Meade County, surrounded by the wonderful team of caring staff there while peacefully listening to her favorite old country & western music. This extraordinary group of people were the most compassionate care givers & were by her side the last 4 months of her life. They were there for her, when her daughter could not be, they were like family. They kept her daughter, Tammie Warren-Betz (of Palmetto, Florida) connected & informed of Carolyn’s needs, wants, and shenanigans. Yes, at the age of 78, blind from glaucoma, CHF, struggling with COPD, & stage 4 kidney failure, Carol, still found ways to get into trouble, mostly just trying to go from her favorite chair to her bed on her own - most of you that knew her, knew how fiercely independent & quite stubborn she was - she had trouble asking for help, but would take it if you were kind enough to offer. She was preceded in death by her husband, Kenneth L. Warren, who passed away February 19, 2014, in their daughter’s home (Tammie & Aaron’s in Kansas City, MO). Carol & Ken were married July 14, 1984, at Life Tabernacle Church by Rev. G. Elms. Kenneth adopted Carol’s daughter, Tammie, and they all lived for many years at 4th & Jordan in the only yellow house on the street. Ken & Carol divorced in 1998 but remained close friends. Tammie’s biological father, LaVergne “Jim” Gross also preceded Carol in death (April of 2007) in Wichita, KS. Carol attended public school in Monticello, Arkansas. She moved to Kansas when her other brothers (Hampton “Hank” & David “Clinton” - also both deceased now 2006 & 2009) moved up to Kansas back in the early 1960s. She met & married a man, had 2 boys, divorced & the young boys were raised by their paternal grandparents. Carol moved to Garden City, Kansas, met & married Jim, had a daughter, eventually moving to Liberal, KS. They divorced. She worked outside the home as a maid for Mrs. Reynolds at Yellow Freight where she met Ken (who drove for Groendyke Trucking) later marrying him in 1984, she became a stay-at-home wife/mother. She was a member of Alcoholics Anonymous aka A.A. She attended meetings and was the secretary of the local chapter for awhile. She was a great cook & loved music, jewelry, and loved to laugh. She lived in Liberal, Kansas up until 4 months ago. She always talked about missing “home” - she loved rural Arkansas, specifically Monticello, where she was “born & raised”. She shared her wishes with everyone she knew about hating Kansas weather & one day wanting to return to be near her “people”. The land of opportunity, the natural state is where her daughter, Tammie, will spread her ashes & place a headstone for her near her mother, father, & other family/kin that has preceded her in death. She is survived by her daughter, Tammie Lynne Warren-Betz and husband, Aaron E. Betz, and their son, Skyler A Betz, of Palmetto, Florida. Her step-daughter- Lisa & Mike Stewart & their daughter, Taylor of Coconut Creek, Florida. Her two sons, their spouses, & their children, grandchildren, & great grandchildren. Her brother - Randall & Birdie of Monticello, Arkansas, sister-in-law-Martha Kinzalow, nephew- Johnny & Karen Burnett, their children, Niece- Sheila & Dean Kilgore & children, Niece- Cindy Calabrese & children, nephew- Mark & Nora Burnett & children, Nephew- Landeren “Lanny” W. Burnett & son Matthew, Niece- Ramona & Jeff Schilke & son Ben, Niece- Tracey Cordova & daughter Alyssa, Nephew- Michael & Kim Burnett & son Jakob, Great nephew- Joshua & niece- Shantel, Niece- Lisa A. Burks Forrest, her children, & grandchildren. ***Special mention to Tiffany Brady of Liberal, KS who was like a daughter to Carol & childhood best friend to Tammie. She was preceded in death by her grandparents, parents, and many brothers (David “Clinton” & Hampton “Hank”,) sisters (MarthaAnn & her daughter- Sylvia), other relatives & friends too numerous to list. A Celebration of Life (her physical earth birthday) service will be held in Liberal, KS for her family & friends in the area at Hornung Family Funeral Home, 1212 W. 2nd St., Liberal, KS 67901 on Tuesday, December 28th, 2021, at 5 pm. A secondary Celebration of Life service will be held in Monticello, Arkansas (Drew County) at Stephenson-Dearman Funeral Home on Thursday, December 30th, 3 pm for her family & friends in that area. In lieu of flowers, the family asks that trees be planted in her honor, or that you make donations to Kidney Nation (AKF), International Society for Bipolar Disorders, COPD research, or Lewy Body Dementia Research. Condolences may be sent to the family at www.hornungfuneralhome.com Hornung Family Funeral Home, 1212 W. 2nd Street, Liberal, Kansas

The family of Carolyn "Carol" L. Warren created this Life Tributes page to make it easy to share your memories.

Send flowers to the Warren family.