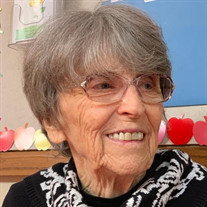 Catherine Marcelle Huebner, age 84, died Sunday, September 26, 2021, at Wesley Medical Center in Wichita, Kansas. Marcelle was the daughter of Buster and Minnie (Silvey) Walk, born on December 21, 1936, which happened to be the anniversary and birthdays of both parents. Marcelle grew up in Leoti, Kansas, and was a graduate of Leoti High School. After graduation, she attended Fort Hays State College where she studied music and English and received her Bachelor of Arts degree. Miss Marcelle Walk began teaching at a country school outside of Leoti. Marcelle eventually moved to Liberal, Kansas, and continued her teaching career in Liberal and Tyrone, Oklahoma. It was after moving to Liberal that this young and pretty teacher caught the eye of Felix Huebner, whom she later married. Marcelle had a love for music. She enjoyed listening to music and playing the piano. She taught music at the Grace Lutheran Church’s mid-week school. She took great joy in sharing the Gospel with children, volunteering, and helping them get to church. Marcelle enjoyed reading her hometown paper and the Bible which probably contributed to her being known as a truly gifted storyteller. Marcelle lived by her favorite Bible verse: “Trust in the Lord with all thine heart; and lean not unto thine own understanding. In all thy ways acknowledge Him, and He shall direct thy paths.” Proverbs 3: 5-6. After studying the three angels’ messages in Revelation 14: 6-12, Marcelle dedicated her life to God, was baptized and joined the Seventh-day Adventists in true worship of God as Creator, on His Holy Sabbath day. She was looking forward to the second coming of Jesus Christ. After starting her family, Marcelle eventually stopped teaching. She later returned to work and worked over a decade as a caregiver. In the latter part of her life, she worked as a cashier at Walmart for several years in Liberal until she retired. She was a generous lady, always helping those in need. She was a dedicated daughter, sister, mother, aunt, grandmother, teacher, caregiver, and friend. Marcelle is survived by three daughters, Linda (Steve) Bruen of Litchfield, Arizona; Sandy Howard of Ballard, Utah, and Karen Huebner-Tibbetts (DeWayne) of Tyrone, Oklahoma, and nine grandchildren: Julia, Logan, Tucker, Anna, Jonathan, Rachel, Quinten, Derick, Sydnee, and eleven great-grandchildren. She was preceded in death by her parents, Buster and Minnie Walk; sister and brother-in-law, Lynette and Max Hasz, daughter, Michelle Huebner, and her son-in-law, Larry Howard. Memorial Services will be at 11:00 a.m. on Monday, October 11, 2021, at the Seventh-day Adventist Church, 300 North Kansas Avenue, Liberal, Kansas. Graveside burial will be the following day, Tuesday, October 12, 2021, at 11:00 a.m. at the Liberal Cemetery. Condolences may be sent to the family at www.hornungfuneralhome.com

The family of Catherine Marcelle Huebner created this Life Tributes page to make it easy to share your memories.

Send flowers to the Huebner family.