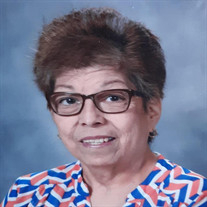 Cathy Louise (Cruz) Segovia, 63, died on Saturday, July 25th, 2020 at Southwest Medical Center in Liberal, Kansas. She was born on October 4, 1956 in Clayton, New Mexico, the daughter of Raymond and Ida (Perea) Cruz. As a child, Cathy had a passion for teaching. She would practice teaching on her siblings and nieces. Cathy would later go on to fulfill her dream of being a teacher. She taught for a total of thirty – eight years. The last thirty – two years she spent teaching at USD 480 in Liberal, Kansas. In 1975, Cathy graduated from Clayton High School, in Clayton New Mexico. In 1980, she also received her Bachelor’s Degree from Oklahoma Panhandle State University in Goodwell, Oklahoma. While battling cancer, she continued her education and received her Master’s Degree from Kansas Newman University. On December 14, 1997, Cathy was united in marriage to the love of her life, Victor Segovia. Cathy was a woman of grace and her faith carried her through the battle of cancer. Cathy was the beloved mother of son, Joe Manuel Segovia of Liberal, Kansas; stepson, Edel Segovia; and stepdaughter, Cynthia Segovia both of Mexico. She is survived by her loving husband, Victor Segovia of Liberal, Kansas; sisters, Marcella Madrid of Clayton, New Mexico, Martha Cruz, Ernestine Cruz both of Guymon, Oklahoma; brothers, Joe (Dot) Cruz of Guymon, Oklahoma, Frank (Donna) Cruz, Raymond Cruz Jr. both of Amarillo Texas; sister – in – law, Rose Cruz also of Guymon, Oklahoma; brother – in – law, Jr. Martinez of Chocteau, Oklahoma; aunt, Rosalie Perea of Albuquerque, New Mexico; mother – in – law, Tomasita Segovia of Mexico; and numerous nieces and nephews. Cathy is preceded in death by her parents, Raymond and Ida Cruz; brother, Lawrence Cruz; and sisters, Angie Martinez and Lena Cruz. Visitation will be Thursday, July 30, 2020 from 10:00 AM to 4:00 PM at the Hornung Family Funeral Home, 1212 W. 2nd Street, in Liberal, Kansas. A Rosary will be held later that evening, July 30th, at 6:00 PM at the St. Anthony of Padua Catholic Church, 1510 N. Calhoun Ave, in Liberal, Kansas. A Mass Christian Burial will be celebrated on Friday, July 31st, 2020 at the St. Francis Xavier Catholic Church at 10:00 AM in Clayton, New Mexico. Burial to follow services at the Clayton Memorial Cemetery.

Cathy Louise (Cruz) Segovia, 63, died on Saturday, July 25th, 2020 at Southwest Medical Center in Liberal, Kansas. She was born on October 4, 1956 in Clayton, New Mexico, the daughter of Raymond and Ida (Perea) Cruz. As a child, Cathy had a... View Obituary & Service Information

The family of Catherine Louise Segovia created this Life Tributes page to make it easy to share your memories.

Send flowers to the Segovia family.