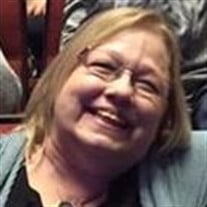 Cynthia Jean Lovelace 64, died Sunday, April 28, 2019 at Presbyterian Hospital in Albuquerque, NM. She was born November 26, 1954 in Coleridge, NE., to Merritt Sassaman and Norma Jean Ruger Sassaman. She graduated from Pender High School in Pender NE., in 1973. She worked for Sunflower Bank and Golden Plains Credit Union as a Bank Teller. She also worked for National Carriers in the permit department and for Connie’s Hallmark. She was introduced to her husband, Robert Lovelace, at the bowling alley and, following a whirlwind courtship, they were married on October 15, 2005. Robert and Cindy settled in Turpin, OK where they built a life Together. Cindy had an outgoing personality and was quick to laugh; she mostly enjoyed spending time with family and friends including her three grandchildren, Tristan, Teixeira and Trexynn, whom she adored. Bob and Cindy spent their time together golfing, bowling and attending an occasional dance. Cynthia loved spending time with her grandchildren, meeting people and bowling. She was a member of the First United Methodist Church, United Methodist Women and served as secretary the Willow Tree Ladies Golf Team and the Society for Prevention of Bored House Wives. She is survived by her husband, Robert Lovelace, parents, Merritt and Norma Sassaman of Ft. Mohave, AZ. A son Travis Olive (Randee) of Augusta, KS. A daughter, Erin Martin (Richard) of Pueblo West, CO. Brothers William Sassaman of Phoenix, AZ and Rodney Sassaman (Katrina) of Peoria, AZ. Sisters Brenda Shekell (Michael) of Westminster, CO., Anita Russell (Paul) LaSalle, CO., Regina Schnieder (Bruce) of Keaau, HI., Connie Stutz (Gary) of Cashton, WI., Pamela Sagel (David) Westminster, CO. There are 3 grandchildren Tristan, Teixeira and Trexynn. Twelve nieces and nephews and numerous great nieces and nephews. She is preceded in death by a son Nathan Olive in 2009 and Stepson William “Will” Lovelace. An infant brother, Jacob. Her grandparents William E. and Alda Sassaman and Ervin and Marie Ruger and 2 nephews Christopher and Lucas. Visitation will be from 1:00 to 8:00 P.M. Thursday, May 2nd with the family present to receive friends from 6:00 to 8:00 P.M. at the Brenneman Funeral Home Chapel, 1212 W. 2nd, Liberal, KS 67901. Visitation will also be from 9:00 A.M.to 5:00 P.M. Friday, May 3rd at the Funeral Home. Funeral Service will be 10:00 A.M., Saturday, May 4, 2019 at the First United Methodist Church, Liberal with Rev. Jerry Odle presiding. Burial will follow in Liberal Cemetery. Memorial contributions may be made in Cynthia’s name to the Turpin Fire Department or the First United Methodist Church, of Liberal

The family of Cynthia Jean Lovelace created this Life Tributes page to make it easy to share your memories.

Send flowers to the Lovelace family.