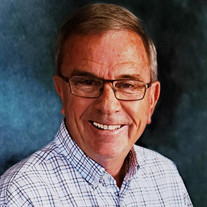 It is with deep sorrow and much love that we mourn the passing of Darrel J.H. Hay on January 8, 2022 at the age of 78. Jay, the youngest of 8 siblings, was born in Hollis, Oklahoma to Garrel and Versie Hay on June 8, 1943. He was a graduate of Hollis High School, and it was there that he met his wife of 60 years, Kay (Green) Hay. Jay went on to complete his BSBA plus graduate studies at the University of Tulsa in Tulsa, Oklahoma. In 1971 he moved to Liberal to join Dick Godfrey, who had a branch office of the Hutchinson based CPA firm Bartlett, Settle and Edgerle. In 1973 they purchased the firm and started Godfrey and Hay, Chartered which later became Hay, Rice and Associates, Chartered. Jay was an active and dedicated professional and community member serving in leadership roles in multiple organizations including the Cooper Clark Foundation, the American Institute of CPAs, the Kansas Society of CPAs, the Southwest Kansas Chapter of Certified Public Accountants, the Rundell Foundation and the Gould Foundation. He was a past member on the Board of Trustees for Southwest Medical Center for 15 years and served on the Chamber of Commerce Board from 1979 until 1987, serving as president in 1986. Jay was also a board member of the Liberal Bee Jays from 1975 to 1981 and from 2010 to 2016 and the United Way Drive Chairman in 1990. He was a member of First Baptist Church and served as a council member for the Boy Scouts of America Troop 181, a past member of the Joint Economic Development Council and a chairman for the Centering on Seniors Capital Campaign. He was an avid sports enthusiast and coached Kids Inc. for many years and was the Kids Inc Director for 15 years. He assisted in starting Babe Ruth Baseball in 1982 and coached American Legion baseball from 1987 to 1993. Jay was an OU fan who enjoyed spending time with his family and attending athletic events at Liberal High School, Seward County Community College, and the Liberal Bee Jays. He was always on the go, but dedicated time to be a trusted resource and care provider to many family members, friends and clients over the years. Most knew his serious side, but he was known to get a grin out of pulling pranks on family and friends. He also gave affectionate nicknames to his grandkids. As a father of 4 sons, all the granddaughters would be called “Little Lady”. Jay is survived by his wife, Kay, 4 sons and 2 daughter-in-laws: Craig Hay of Liberal, KS, Scott Hay of Wichita, KS, Brian and Jobeth Hay of Olathe, KS and Rodney and Michelle Hay of Liberal, KS., 7 grandchildren (Joshua, Shelby, Riley, Whitney, Reece, Jayton, and Jarren) and 1 great-grandchild (Beckett Hay). He was preceded in death by his parents, 6 of his siblings, daughter-in-law (Kim Hay), and grandsons (Nicholas and Nathan). A graveside service will be held on Saturday, January 22, 2022 at 11:00 am, at the Liberal Cemetery with Pastor David Bagwell presiding. In loving tribute to a life well lived, A Celebration of Life following the graveside will be held at the First Baptist Church, 204 N Sherman Ave. Liberal, Kansas from 12:30 pm to 2:30 pm. A meal will be served at the church. Please join the family there to greet them and share in fellowship. As an expression of sympathy and in lieu of flowers, memorial contributions can be made to the First Baptist Church, the Liberal Bee Jays organization or Kids Inc. in Jay’s memory. Donations made out to the charity of your choice can be sent to Hornung Family Funeral Home, 1212 W 2nd Street, Liberal, KS 67901. Condolences may be sent to the family at www.hornungfuneralhome.com

It is with deep sorrow and much love that we mourn the passing of Darrel J.H. Hay on January 8, 2022 at the age of 78. Jay, the youngest of 8 siblings, was born in Hollis, Oklahoma to Garrel and Versie Hay on June 8, 1943. He was a graduate... View Obituary & Service Information

The family of Darrell 'Jay' J.H. Hay created this Life Tributes page to make it easy to share your memories.

It is with deep sorrow and much love that we mourn the passing...

Send flowers to the Hay family.