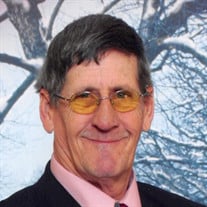 Dennis Neal Stoddard, 65, of Stevens County, died on July 6, 2016. Dennis began his time on earth on April 13, 1951, at Liberal, KS. He was the second of four children born to Ralph D. and Norma (Crawford) Stoddard. Dennis spent his growing up years on a farm where he learned, as most farm boys do, to drive trucks and tractors. The skills he learned in those early years of his life are what he later used to make a living. After helping his dad on the farm, Dennis made a living by driving semi-trucks. His trucking experiences allowed him the blessing of seeing and experiencing a lot of the United States plus meeting and visiting with a lot of people. Dennis loved people and could easily start a conversation with anyone from anywhere. Dennis was a self-less person. He would no sooner acquire something only to turn around and give it to someone whom he felt needed it more than he did, even if it meant he didn’t have any. A truck accident in 2011 force Dennis to retire from truck driving, and follow a different path. He then spent a couple of years at Pittsburg, KS working as groundskeeper at Weir Baptist Camp, there again making new friends. He came back to southwest Kansas in 2014 settling at Park Plaza Towers, Dodge City. One of the life skills Dennis perfected, with help from his mom, was baking. Homemade pies and cinnamon rolls, along with grilling, gained him the title of party planner and chef at Park Plaza. A short illness brought Dennis home to Hugoton, where he lived out his days. Dennis surrendered his life to the Lord Jesus Christ, and loved Him, leaving those he loved here, with the hope of meeting him again. Dennis is survived by: parents Ralph D and Norma Stoddard Hugoton, KS 1 brother Roy Stoddard and his wife Debbie Hugoton, KS 2 sisters Cynthia Martin and husband Ron Hugoton, KS Jill Rodriguez and husband Richard Lone Tree, CO 1 daughter Tanya Vallad Whitesboro, TX 2 grandchildren, 6 nieces and nephews, 16 great nieces and nephews He was proceeded in death by a daughter, Melissa Stoddard, and granddaughter Abby Vallad. Visitation will be Sunday, July 10 from 1:00 PM to 5:00 PM at Brenneman Funeral Home. The family will be present to greet friends during that time. Memorial Service will be held at 11:00 AM Monday, July 11, 2016 at Moscow Baptist Church with Pastors Larry Bradford and Sean Schraeder presiding. Graveside services will be private. Memorial contributions may be sent to the Moscow Baptist Church, designated for the Hillbilly Band (his church praise band), in care of the Brenneman Funeral Home 1212 W. 2nd Liberal, KS 67901. Condolences may be sent to the family at www.brennemanfuneralhome.com

Dennis Neal Stoddard, 65, of Stevens County, died on July 6, 2016. Dennis began his time on earth on April 13, 1951, at Liberal, KS. He was the second of four children born to Ralph D. and Norma (Crawford) Stoddard. Dennis spent his growing... View Obituary & Service Information

The family of Dennis Neal Stoddard created this Life Tributes page to make it easy to share your memories.

Send flowers to the Stoddard family.