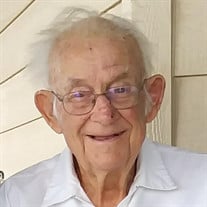 Earl Franklin Owens, 98, died Monday, May 20, 2019 at Southwest Medical Center in Liberal. He was born on February 10, 1921 in Kismet, Kansas, the son of Benjamin Franklin and Estella Mae (Louthan) Owens. He graduated from Kismet High School in 1939. On April 28, 1940 he married Eleanor Chapman at the United Brethren Church in Kismet. She preceded him in death on December 9, 1978. On May 7, 1982 he married Pauline Olsen Renick at the Friends Church in Liberal. She preceded him in death on January 30, 1992. On June 1, 1997, He married Rita Betham Hardy. She preceded him in death on March 12, 2010. Earl served in the United States Army, from 1943 to 1946, in the Philippines during WWII. He also served during the Korean War as a Sargent (Instructor, combat engineer). He worked at Panhandle Eastern as an Engineer, Rolfsmier Dairy as a herdsman, and was self employed as a handyman and electrician. He was an active member of the Seventh Day Adventist Church. Survivors include: 1 Son Galen Owens and his wife Gail Liberal, KS 2 Grandchildren Andrew Owens and his wife Lisa Liberal, KS Dennis Owens and his wife Kayla Plains, KS 3 great grandchildren Bryson, Luke, Ellie Owens. 7 step children and numerous step grandchildren and great grandchildren, and numerous nieces and nephews. He preceded in death by his parents, his brothers, Edwin, John Kelly and Owen Dean Owens, and his sisters, Gladys Owens Brown, Lila Owens Maupin, and Vera Owens. Graveside services will be held 10:30 am, Saturday, May 25, 2019 at the Kismet Cemetery with Pastor Andrew Wehling presiding. Visitation will be Friday, May 24, from 9am to 8pm, with the family present to great friends from 6pm to 8pm at the Brenneman Funeral Home. Memorial contributions may be sent to the Kismet Alumni, in care of the Brenneman Funeral Home 1212 W. 2nd Liberal, KS 67901. Condolences may be sent to the family at www.brennemanfuneralhome.com

Earl Franklin Owens, 98, died Monday, May 20, 2019 at Southwest Medical Center in Liberal. He was born on February 10, 1921 in Kismet, Kansas, the son of Benjamin Franklin and Estella Mae (Louthan) Owens. He graduated from Kismet High School... View Obituary & Service Information

The family of Earl Franklin Owens created this Life Tributes page to make it easy to share your memories.

Send flowers to the Owens family.