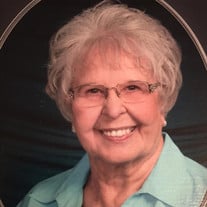 Ella Mae Ellis Pennington, 88, died Thursday, September 15, 2016 at Southwest Medical Center in Liberal, KS. She was born March 9, 1928 in Stevens County, the daughter of Earl John and Lola May (Thomas) Ellis. She graduated in 1945 from Haviland... View Obituary & Service Information

The family of Ella Mae Pennington created this Life Tributes page to make it easy to share your memories.

Send flowers to the Pennington family.