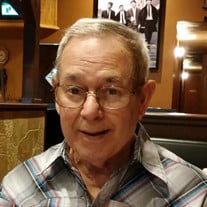 Ernest “Ernie” Lee Davis, 75, died Wednesday, August 19, 2020 in Protection, Kansas. He was born October 1, 1944 in Galveston, Texas, the son of Ernest William Davis and Georgie Robbins Davis. Ernie graduated from High School in Baker, Oklahoma. He later went on to attend Panhandle A & M where he was in the college choir. While attending college, he also met his future wife. On March 26, 1966, he married the love of his life, Lavena Davis, in Felt, Oklahoma. She survives. From 1965 to 1967, Ernie served in the Army Reserves during Vietnam. Prior to his health issues, he had worked in the Sanitation Department at the City of Liberal. He was also a member of the Emmanuel Baptist Church, the Square Dance Club, and the Archery Club. Ernie had many hobbies, but his favorites were camping and fishing. He was the beloved father of son, Ronnie Lee and his wife Mary Davis of Plains, Kansas; and daughter, Cynthia Gaylynn David and her husband Kelly David of Lacey, Washington. Ernie was the proud grandfather of two grandchildren, Tanner Lee Davis and Matthew Ryan Davis, both of Plains, Kansas. He is also survived by his sister, Betty Edwards of Lawton, Oklahoma; brother – in – law, Johnnie Mayhan of Kim, Colorado; sister – in – law, Loveta Carter of Guymon, Oklahoma; nieces, Debbie and her husband Jeff Stone, Michelle Edwards; and great – nieces, Jessica and Jacqueline Stone. Ernie is preceded in death by his parents; daughter, Brenda Kay Davis; step – father, Carl Mendenhall; and brother – in – law, Elvis “Butch” Edwards Visitation will be Friday, August 21, 2020 from 9:00 AM to 8:00 PM, with family present to greet friends from 5:00 PM to 8:00 PM, at the Hornung Family Funeral Home, 1212 W. 2nd Street, in Liberal, Kansas. The Funeral Service will be Saturday, August 22, 2020 at 11:00 AM at the Emmanuel Baptist Church, 1550 N. Western Ave, in Liberal, Kansas. A burial will follow the services at the Liberal Cemetery, 1900 W. 15th Street, with Pastor Kelly David presiding. Memorial contributions may be sent to Protection Valley Manor, in care of the Hornung Family Funeral Home 1212 W. 2nd Liberal, KS 67901. Condolences may be sent to the family at www.hornungfuneralhome.com

The family of Ernest "Ernie" Lee Davis created this Life Tributes page to make it easy to share your memories.

Send flowers to the Davis family.