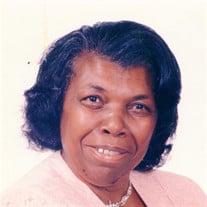 Essie V. Witherspoon, age 81, died February 13, 2017 at Southwest Medical Center in Liberal, KS. She was born May 1, 1935 at Pickens, AR, the daughter of George and Mary Lee (Mingo) Baker. On August 6, 1959, she married James Witherspoon at... View Obituary & Service Information

The family of Essie V. Witherspoon created this Life Tributes page to make it easy to share your memories.

Send flowers to the Witherspoon family.