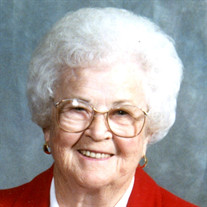 Fairrie Elizabeth Watson, age 94, died Sunday, September 10, 2017, at Liberal Good Samaritan Center. She was born May 8, 1923 Wrigley, TN, the daughter of Alonzo Franklin and Fronie Elizabeth (Black) Rodgers. She had resided in West Tennessee most of her life, moving to Wichita in 1964. She had been a resident of Liberal since 1991. She worked as a seamstress for Henry I. Seigel (HIS), pants factory in Dickson, TN. She worked in the food service industry, as cook, for many years and was a homemaker. She was a member of the Emmanuel Southern Baptist Church, in Liberal and the Order of the Eastern Star, Wichita, KS. She married Walter T. Young, Jr., in February 1942 at Corinth, MS. They were divorced. She married George Mather Maddox, on July 1, 1960, at Ft. Knox, KY. He died November 24, 1982. She married Orvil Jefferson Watson, on November 13, 1993. He died June 14, 2004. Survivors include 1 Son Charles F. Maddox and wife Sue Liberal, KS 1 Granddaughter Tiffany Rene Libel Wichita, KS 1 Great Grandson Braiden James Wichita, KS And many Nieces and Nephews She was preceded in death by her parents, 1 Daughter Beverly Kaye (Maddox) Libel, 4 Brothers Loyd, James, Millard and Harvill Rodgers, 2 Sisters Allie and Beulah Rodgers and 1 Grandson Chris Aldon Libel II. Funeral service will be 2:00 p.m., Wednesday, September 13, 2017 at Broadway Mortuary Wichita with Pastor Erin Rush, presiding. Burial will be in the Resthaven Gardens of Memory, Wichita, KS. Visitation will be from 9 am to 7:30 pm Tuesday, September 12, 2017 at Brenneman Funeral Home, 1212 W. 2nd, Liberal, KS, with family present to greet family and friends from 6:00 to 7:30 PM. The family request no flowers and Memorial contributions may be sent to the Emmanuel Southern Baptist Church or Good Samaritan Society in care of the Brenneman Funeral Home 1212 W. 2nd Liberal, KS 67901. Condolences may be sent to the family at www.brennemanfuneralhome.com

The family of Fairrie Elizabeth Watson created this Life Tributes page to make it easy to share your memories.

Send flowers to the Watson family.