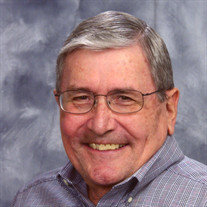 Garth Leon Cobb, 77, passed away Wednesday July 6, 2016 at Good Samaritan Society, Liberal, KS. He was born July 4, 1939 in Liberal, KS to Otto Nathaniel and Emma B. Hogue Cobb. Garth graduated Plains High School in Plains, KS in 1957. After graduation he attended the Kansas School of Barbering in Wichita, KS. In November of 1961 he was drafted into the U.S Army and was discharged in November 1963. During 1963 to 1965 he came back to Plains to cut hair at Gray’s Barber Shop, which he later purchased along with Melvin Cook. In 1965, he sold his share to Melvin then enlisted in the U.S Air Force and retired in 1985 as a Master Sargent in the military police. He is a member of Plains United Methodist Church. Survivors: 2 Brothers Gary (Ellen) Cobb Springs, TX Garvin (Karen) Cobb Meade, KS 2 Sisters Judith (Bruce) Hendricks Henderson, NV. Cheryl Carson Liberal, KS Nieces and Nephews Larry Cobb, Kari Furman, Dina White, Ginger Borth, Jamey Cobb, Michael Carson, Jennifer Pittman, Renae Steele, Stacey Chambliss. Many great nieces and nephews. He was preceded in death by his parents. Funeral services will be 10 AM, Saturday, July 9, 2016 at Brenneman Funeral Home Chapel with Pastor Keith Anglemyer officiating. Visitation will be from 3 to 8 PM with the family receiving friends from 6:30 to 7:30 PM Friday, July 8, 2016. Burial will be in Restlawn Cemetery with military services provided my McConnell Air Force Base, Wichita, KS. Memorials may be given in Garths name to the American Lung Association in care of Brenneman Funeral Home 1212 W. 2nd St. Liberal, KS 67901. Condolences may be sent to the family at www.brennemanfuneralhome.com

The family of Garth Leon Cobb created this Life Tributes page to make it easy to share your memories.

Send flowers to the Cobb family.