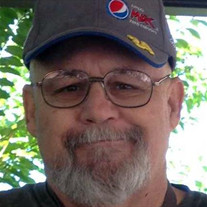 George Edward Fawcett, age 68, died Thursday November 14, 2019, in Newton, Kansas. He was born April 16,1951 in Springfield Illinois, the son of Edward and Carol “Peggy” (Groat) Fawcett He graduated from High School at Southwestern Heights School, Kismet, Kansas George married Kathy Harp December 15, 1972, sadly they divorced, she preceded him in death On October 6, 2000 he married Christine Hendrix. George and Christine resided in Mead and of late in Newton, Kansas. George served in the United States Army from 1970 to 1972. He worked as a Field man for Panhandle Eastern for many years. George loved to be out in nature hunting and fishing, he also did some hunting with bow and arrow. He also had many hobbies such as woodworking, lathe turning, remote control model airplanes, photography, boating and skiing. He loved spending family time playing cards and board games. Survivors include: His Wife Christine of Newton Kansas. 2 sons Jason Fawcett and his wife Mary of Hesston, Kansas and Kevin Fawcett and his wife Kendra of Springdale, Arkansas. Daughter Iris and her husband Dallas Smith of Tyrone, Oklahoma. 2 Sister Janet Headrick of Rago, Kansas and Linette Fawcett of Pratt, Kansas. He was the proud grandfather of 5, Kylie, Kage, Kaitlyn, Megan, Nevin. George was preceded in death by His Parents, Visitation will be Monday, November 18th from 11:00 am to 2:00 pm followed by a funeral service at 2:00 pm at the Brenneman-Hornung Funeral Home, Family Chapel, 1212 West 2nd Street, Liberal, Kansas. Interment will be in Kismet Cemetery, Kismet Kansas. Lawrence M. Wimmer, Post #80, of the American Legion will provide the honors. Reverend Keith Anglemyer presiding. Memorial contributions may be sent to the charity of your choice, in care of the Brenneman-Hornung Funeral Home 1212 W. 2nd Liberal, KS 67901. Condolences may be sent to the family at www.brennemanfuneralhome.com

The family of George Edward Fawcett created this Life Tributes page to make it easy to share your memories.

Send flowers to the Fawcett family.