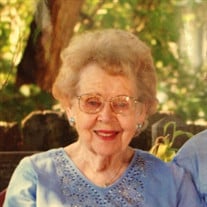 Former longtime Hugoton and Liberal, Kansas area resident, Hope Dunlap, 93, died with her family members by her side Friday, July 29 in Oklahoma after steadfastly combating the consequences of a substantial stroke. She was born on July 4, 1923 into William and Blanche Kinser’s large family: brothers Elrie, Leslie, LeRoy, Robert, Floyd, Loyde, Arlie, Trulin, and sisters Fay, Grace, Fern, Loene, and Stella. Hope was originally married to Kenneth Miller, now deceased, of Liberal, Kansas with whom she had four children. Later she married Lawrence Harris of Moscow, Kansas whose devotion to her made it possible after his death for her to live comfortably in her declining years for which the family is most grateful. Lastly, she married the Rev. Floyd Dunlap who spoke appreciatively of the tranquility she brought to the home. Hope’s life ranged from living in New Jersey waiting for her husband to return from WWII to being twice a preacher’s wife in Oklahoma and Texas. After returning to the Liberal/Hugoton area where she was born, she took special pride about working in the men’s clothing department of the C R Anthony’s stores in Liberal. She loved to dress sharp and look nice as she competed for top sales person, reveling in those years she managed to achieve status in the company’s $100,000 club. She found her happiness in service to others, as a homemaker, a preacher’s wife, and because her house was laid out so efficiently for such purposes, when she hosted huge family get-togethers, holiday celebrations, reunions, and a steady stream of visiting relatives, friends and acquaintances. Such occasions supplied her fervent ambition to see that everyone was well-served with sprawling portions of food and beverage. She never believed her guests had eaten enough. She wanted everyone to take something home with them. This desire continued even to her final months when, even though she might be unable to remember who you were, nor manage it, she wanted to find something she had “cooked” for you or to share what anyone had brought her. Her greatest gifts were twofold: one, her kindness, generosity, concern for others, and a sense always that you be taken care of if she could manage it at all; the other was her being part of such a sprawling family. This allowed her children, in growing up surrounded by what seemed like a boundless number of aunts, uncles, and cousins, to learn easily the value of family and the simple pleasures of visiting with people and caring for them, which clearly represented her most fervent calling and a recipe for turning out decent human beings. Should this be her only remaining footprint, she can rest at home in Hugoton as she yearned to having had a virtuous life well-lived and her job complete. She was loved and admired by many. Having buried three husbands, she is survived by the families of son, Dennis R. Miller, wife Rebecca, grandson Zac Miller, wife Sarah, and granddaughter, Emily Earnest and husband, Matt; son Dale L. Miller, wife, Mary, and granddaughter, Sara van Dijck and husband, Jasper; granddaughter, Kacy Warren and husband Micah. Of her fourteen siblings, only four remain. Preceding Hope in death, besides her parents and her three husbands was an infant son, Larry, her daughter, Patricia Ann Miller, and grandson Gabriel S. Miller. The family wishes to thank the staff of the Rambling Oaks Courtyard Memory Care Unit and the staff of McCortney Family Hospice for the loving care they gave Hope. Funeral services will be Friday, August 12, at 10:00 A.M. at the Bethel Friends Church in Hugoton, Kansas. Visitation with the family present will precede the service at the church from 9:00 to 10:00. Burial will be at the rural Bethel Community Cemetery west of the Moscow-Hooker Road. Condolences may be sent to the family at www.brennemanfuneralhome.com. Memorial contributions may be sent to Barclay College, Haviland, Kansas in care of Brenneman Funeral Home and Cremation Services 1212 W. 2nd St. Liberal, KS 67901

Former longtime Hugoton and Liberal, Kansas area resident, Hope Dunlap, 93, died with her family members by her side Friday, July 29 in Oklahoma after steadfastly combating the consequences of a substantial stroke. She was born on July 4, 1923... View Obituary & Service Information

The family of Hope Ellen Dunlap created this Life Tributes page to make it easy to share your memories.

Send flowers to the Dunlap family.