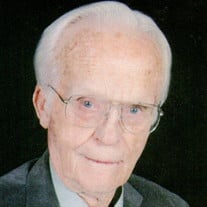 Jack Richard Massoni, 89, was called home to the Lord on March 4th, 2017 at Hill Top House Skilled Nursing Facility in Bucklin, KS. He was born in Hutchinson, KS. on May 20, 1927. He was the son of Floyd H. and Mildred (Bundy) Massoni. He grew up in the Kismet community and graduated from Kismet High School in 1945. Jack was a veteran of the United States Navy, serving from 1945-1946 during World War II. He married Mary Jane Douglas on July 7, 1946. He loved the land, and was a farmer/rancher by choice. In 1978 he became a cattle buyer for National Beef Packing and 20 years later, for Satellite Cattle Exchange. Still later he drove for Security Transport and for USD 483. He was a member of the Emmanuel Mennonite Church in Meade, KS. He was a former church member and Sunday School teacher in communities where he and Jane lived, including at the Kismet Evangelical United Brethren Church, Faith Tabernacle in Liberal, Calvary Gospel in Goodland, Assembly of God in Lakin, and Faith Bible Church in Kismet. Jack was a member of the Liberal Camp of Gideons International, where he had served as an officer. At one time, he served on the Kismet Cemetery Board, Southwest Kansas Irrigators Association, and Plains Equity Exchange Board. He is survived by his children, J. Steven (Kelley) Massoni of Wichita, KS; Mark R (Annette) Massoni of Turpin, OK; Susan (Warren) Fox of Plains, KS; Celia (Jere) Beymer of Lakin, KS. He was also survived by his brother John D Massoni of Sunset, LA. He is survived by 11 grandchildren: Vanessa (Aaron) O’Brien Justin, Joshua, and Marissa Massoni; Hayley Smith, Jordan (Ranee) Massoni; Amye (Joel) Baker, Beth (Craig) Giesick, Cara (Jay) Borth, Betsey and Buck Beymer. 18 great grandchildren: Cora O’Brien, Tyler, Taylor, and Bayley Olomon; Adde and Jaidey Smith, Gavin and Grayson Massoni, Noah, Gage, and Sydney Baker, Kelsie (Barry) Lucas, Brendan, Jalane, and Jaren Giesick, Nick, Hayden, and Jack Borth. 5 great-great grandchildren Bentley and Britton Lucas, Elizabeth, Lilly, and Aubrey Olomon. He was preceded in death by his wife Mary Jane Douglas, his parents Floyd H. and Mildred Massoni, his infant brother Robert, and daughter Melissa Massoni. He was a good husband, father, brother, and friend. Jack was a Christian man who desired that everyone would come to the saving grace of Jesus Christ. Visitation will be held Thursday March 9th, from 9AM – 8PM. Family will be present from 6PM-8PM at Brenneman Funeral Home at 1212 W. 2nd St Liberal, KS 67901 Graveside Service will be held on Friday March 10th at 11:00AM at Kismet Cemetery. Memorials contributions can be made to: The Gideons or Emmanuel Mennonite Church in Meade, in care of Brenneman Funeral Home 1212 W. 2nd Liberal, KS 67901. Condolences and memories may be shared with the family at www.brennemanfuneralhome.com

Jack Richard Massoni, 89, was called home to the Lord on March 4th, 2017 at Hill Top House Skilled Nursing Facility in Bucklin, KS. He was born in Hutchinson, KS. on May 20, 1927. He was the son of Floyd H. and Mildred (Bundy) Massoni. He... View Obituary & Service Information

The family of Jack Richard Massoni created this Life Tributes page to make it easy to share your memories.

Jack Richard Massoni, 89, was called home to the Lord on March...

Send flowers to the Massoni family.