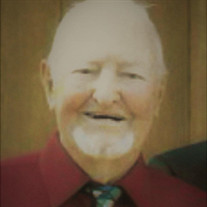 James “Jim” Edward Odom, age 95, died Saturday, November 13, 2021, at Wheatridge Park Care Center in Liberal, Kansas. James Edward Odom was born September 7, 1926, in Pocahontas-Carbon Hill, Walker County, Alabama, to William E. and Jacie (Holmes) Odom. He graduated from Guin (Alabama) High School in 1944 and immediately joined the service at the age of 17. James served in the U.S. Navy in World War II aboard the U.S.S. Hampton. After the war, he was an instructor for the Navy Reserves, and he attended Birmingham Business College and the University of Alabama-Birmingham. James married Sarah Lancaster in 1947 in Caledonia, Mississippi, and they had 3 children. James had a long, successful career as a salesman in the meat industry, working in many cities, including Birmingham, Alabama; Waterloo, Iowa; South Sioux City, Nebraska; Plainview, Texas; and Liberal, Kansas. He retired from National Beef Packing in 1990. James was an avid golfer, and he supported both Liberal High School and Seward County Community College athletics. He was a past or present member of the American Legion, Elks, VFW, Fargo Masonic Lodge, and Midian Shrine. He served for many years on the Board of Directors for Liberal Bee Jay Baseball. James attended the First United Methodist Church in Liberal. He is survived by his children, Larry (Anne) Odom of Tuscaloosa, Alabama; Sharon Otte of Lincoln, Nebraska; and Phillip (Sally) Odom of Yukon, Oklahoma; eight grandchildren, and 17 great grandchildren. He was preceded in death by his wife, Sarah Odom; his parents; his brother, William E. Odom, Jr.; and his grandson, Jeremy James Odom Funeral Services will be at 11:00 AM, Saturday, November 20, 2021, at the Hornung Family Funeral Home Chapel, 1212 W. 2nd Street, Liberal, Kansas with Brad Bennett presiding. In lieu of Flowers the family request memorial donations to The Shriner’s Hospital for Children, The American Legion or the Masonic Lodge in care of the Hornung Family Funeral Home, 1212 W. 2nd Street, Liberal, Kansas. Condolences may be sent to the family at www.hornungfuneralhome.com Hornung Family Funeral Home, 1212 W. 2nd Street, Liberal, Kansas.

The family of James "Jim" Edward Odom created this Life Tributes page to make it easy to share your memories.

Send flowers to the Odom family.