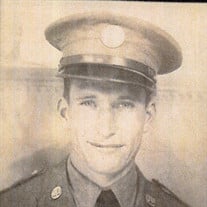 John Douglas “J.D.” Stoddard age 100, died Tuesday, November 12, 2019, at Southwest Medical Center in Liberal, Kansas. He was born January 9, 1919 in Trinidad, Colorado, the son of Harry and Nora Birch (Ferguson) Stoddard. J.D. Served in the Army as a Sergeant during World War II. He was Prisoner of War captured in the Philippine Islands and held by the Japanese for 3 years. J.D. Married Mary Lou Hendrickson in Tucumcari, New Mexico on June 15, 1951. She preceded him in death on November 29, 1984. He worked as a mechanic for Schlumberger and Frontier Perforators. He was also a Crew Chief for Beech Aircraft. Survivors include: 2 Daughters, Kay Bert of Liberal, Kansas and Janice (Eric) Van Eck of Moore, Oklahoma. Brother Ralph Stoddard of Hugoton, Kansas. He is the Proud Grandfather of Sara Web and Jimmy Bert, and Step Grandfather of Tony, Scott, Erik, Nick VanEck. Mr. Stoddard was preceded in death by his parents and his wife of 33 years Mary Lou. He was also preceded in death by Sisters Nina Morgan, Opal Richardson, Geneva Bruner, LaVon Norris, and Brothers Russell, Ted, Pete and Harold Stoddard. He is also preceded in death by Myrtle Pettijohn, his special friend of 25 years. Visitation will be Thursday November 14, 2019 from 12:00 PM to 8:00 PM, with the Family present to greet friends from 6:30pm to 8pm. Funeral Services will be Friday November 15, 2019 at 10:00 AM, held at the Brenneman-Hornung Funeral Home, 1212 West 2nd Street, Liberal Kansas Interment will be in the Restlawn Cemetery following the chapel service, with Military Honors. The services will be conducted by Sara Web his granddaughter. Memorial contributions may be made to St Jude Hospital for Children, in care of the Brenneman Funeral Home 1212 W. 2nd Liberal, KS 67901. Condolences may be sent to the family at www.brennemanfuneralhome.com

The family of JD Stoddard created this Life Tributes page to make it easy to share your memories.

Send flowers to the Stoddard family.