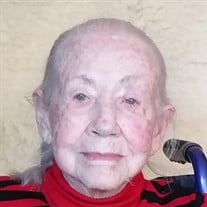 Jean Randall, 99, died Saturday March 11, 2017 at Wheatridge Park Care Center, Liberal, KS. She was born September 7, 1917 in rural Pratt, KS, to Henry Carpenter and Edna Chittenden Carpenter. Her family moved to a farm east of Hugoton when she was 3. Her parents decided that Jean would become a professional dancer, and she moved to Wichita when she was 13 ½. There, she attended the Edler School of Dancing. Later, she auditioned for the Jack Randall Dancing Troup, as an adigo dancer. Jean Married Jack Randall February 14, 1935 in New York City.They were in show business for 8 years, and they then moved to Hugoton, where Jack Farmed. He died February 26, 1986. They had Randall Cafeteria, and Sands Motel and Jack started the first Pancake Day feed at their cafeteria. They had Randall Amusement Park. After Jack passed away on February 26, 1986, Jean got involved in many community activities as well as being instrumental in developing the entrance to SWMC with flowers and trees. Jean crocheted over 1,000 newborn baby’s caps for SWMC. She developed school scholarships for 2nd graders for many years. After she married Joe Heschmeyer on December 6, 1994, they enjoyed driving and attending VIPER rallies across the United States. He died April 4, 2008. She enjoyed the rest of her life with her family. She will truly be missed. Jean was a member of the First United Methodist Church, the Evergreen Garden Club and was a former Girl Scout. She helped with the Capital Campaign for the Hospital. Jean cared for the SWMC garden until 1987. Survivors Jill Tanking and her husband, Jerry Amarillo, TX. Their Children: Terry, Kim, Jett, Ridge, Todd and his wife Mandy, and Kaleb Jan Lunceford Sun City, Arizona Her Children: Douglas, Craig, Brian and his wife Michelle, Olivia & TY Peggy Leech Columbus, Georgia Her Children: Michael, Joan Leech Roberts, Marjorie Leech Richards and her husband Warren, David Leech and Lisa Leech Shell and her husband Rick Special friends Eunice Lunceford & Eana Castro She is preceded in death by and Infant brother and Brother Bill Carpenter a sister June Stegman and a grandson Kelly Lunceford. Memorial services will be 10:30 Saturday, March 18, 2017 at Brenneman Funeral Home Chapel. Inurnment will be in Liberal Cemetery. In Lieu of flowers, Jean had requested that memorials be made to Stepping Stone, The Liberal Rape Crisis Center, or a memorial of your choice, in care of Brenneman Funeral Home 1212 W. 2nd St. Liberal, KS 67901. Condolences may be

The family of Jean Randall created this Life Tributes page to make it easy to share your memories.

Send flowers to the Randall family.