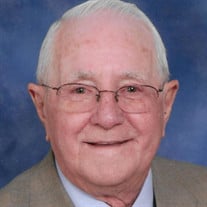 Jimmy M. Kees, age 89, died on Monday, May 10, 2021 at the Southwest Medical Center in Liberal, Kansas. He was born on January 24, 1932 son of Johnny and Irene (Cabaniss) Kees in Dallas County, Texas. Jimmy graduated High School in 1950 from Dumas, Texas. He served in the Army from 1952 through 1954. On September 9, 1956 he married Mattie Geraldine Richardson. Together they raised three children, Jay Michael, Jimmy Dean and Kim. Jimmy and Mattie were married 53 years until her death in 2009. He was hired as a baseball player for the Northern Natural Gas Team at the plant in Sunray, Texas. They played against the Liberal BJ’s. He worked his way up in the company. He painted and maintained the engines and cut grass. Then he moved into administrative duties. He worked in the Texas Panhandle, later moving to Des Moines, Iowa where he acquired budgeting skills. In October 1973, Jimmy moved to Liberal where he worked at the Sublette Plant and did the budget for the entire area and retired in 1985 after over 30 years of service. When the children were young Jimmy refereed basketball and football. After retirement he remodeled houses. On June 15, 2013, Jimmy married Martha Morley in Liberal, Kansas. He was a strong patriarch of his family, a good friend to all, and will be missed by many! Survived by: Wife, Martha Kees of Liberal, Kansas Son, Jay Michael Kees and his wife, Gennyfer of Fontana, Kansas Daughter, Kim Carlile of Liberal, Kansas Daughter-in-law, Stacey Kees of Liberal, Kansas Seven Grandchildren, Jenny, Chad, Randi, Jeremy, Jordan, Jerrica, and Chris And 9 Great Grandchildren, Kaylee, Jeffery, Kaden, Keirsie, Sophia, Ryder, Nolan, Griffin, and Bryce And 1 Great Great Grandchild Kasyn Jimmy was preceded in death by both of his parents, Johnny, and Irene Kees His first wife, Mattie Geraldine (Richardson) Kees his son Jimmy Dean Kees one son-in-law, Alan Carlile and his Great Grandson, Kaiser Carlile Visitation will be 9:00 AM – 8:00 PM on Friday, May 14, 2021, at the Hornung Family Funeral Home 1212 W. 2nd Street Liberal, Kansas, the family will be present to greet friends from 6:00 PM – 8:00 PM Funeral Service will be at 2:00 PM on Saturday, May 15, 2021 at the Hornung Family Funeral Home 1212 W. 2nd Street Liberal, Kansas with Reverend Jack Jacob and Reverend Jeremy Harris presiding Interment will follow at the Restlawn Cemetery. Memorial donations suggested to Alzheimer’s Association in care of Hornung Family Funeral Home. Condolences may be sent to the family at www.hornungfuneralhome.com e.com

The family of Jimmy Madison Kees created this Life Tributes page to make it easy to share your memories.

Send flowers to the Kees family.