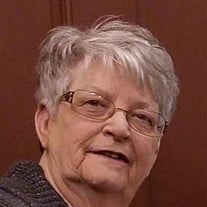 JoAnn Combs, age 71, died July 30, 2018 at Via Christi St. Francis Hospital in Wichita, KS. She was born August 6, 1946 in Woodward, OK, the daughter of Joe and Betty (Van Huss) Spurgin. She grew up in Wellington, KS. On January 5, 1962, she married Clarence Combs at Perryton, TX. He survives. She moved to Liberal with her family in 1980. She was employed by the City of Liberal at the Tourism Department for 15 years, retiring in July 2012. She served as the Secretary for the International Pancake Day since 2000. She was a Girl Scout leader, and a member of the Optimist Club of Liberal, BPW of Liberal, Wild West Country, Kansas Explorers Club and We-Kan Club. She also served as Secretary, Treasurer, and President of the Liberal Area Genealogical Society. She received the R. J. Leete award from International Pancake Day in 2010, the Hometown Hero award from BPW, the Dare-to Do Dirt Roads award from the Kansas Explorers Club, the We-Kan award for community support, the Kansas Spotlight award for community involvement, and the Chamber of Commerce Women of Distinction award in 2017. She loved Kansas and attended every Kansas Sampler Festival. She enjoyed genealogy, reading, traveling, doing crafts and playing with her great grandchildren. She was a member of First Church of The Nazarene in Liberal, KS. Survivors include: Husband Clarence Combs Turpin, OK 3 Sons Butch (Sterling) Gehrer and partner Cindy Centerton, AR Craig Combs and wife Valerie Union City, OK Lyle Combs Augusta, KS 2 Daughters Susan Plunk and husband Kelly Ridgeway, VA Denise Tharp Wichita, KS 10 Grandchildren and 10 Great Grandchildren. She was preceded in death by her parents; 2 Brothers, Raymond and Dale Spurgin; 1 Sister, Anita Murrain. Funeral Service will be 10:00 a.m., Saturday, August 4, 2018, at First Church of The Nazarene in Liberal, KS with Pastor Arlen Ankle, officiating. Burial will be at Independence Cemetery, Turpin, OK, at a later date. Visitation will be 9:00 am to 7:00 pm Friday, at Brenneman Funeral Home, with the family present from 5:00-7:00 to greet friends. In lieu of flowers Memorial contributions may be sent to the International Pancake Day Foundation in care of Brenneman Funeral Home 1212 W. 2nd Liberal, KS 67901. Condolences may be sent to the family at www.brennemanfuneralhome.com

The family of JoAnn Combs created this Life Tributes page to make it easy to share your memories.

Send flowers to the Combs family.