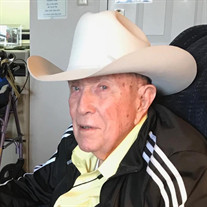 John David Malin, Age 89, Died Tuesday, September 1, 2020, at the Wheatridge Park Care Center in Liberal, Kansas. Mr. Malin was born December 28, 1930 in Liberal, Kansas the son of Horace E. and Elnora (Heath) Malin. John graduated from the Liberal High School with the class of 1949. He lived in Liberal all his life except for 2 years while away attending Southwestern College in Winfield, Kansas, and 2 years in the United States Army. He Married Beverly Headrick on December 27, 1950 in Liberal, Kansas. He was a farmer and rancher working on his own ranch. He also worked as a Real Estate Broker. He owned his own appraisal business, Malin/Mercer. He also worked for Epic Touch. John was a member of Fellowship Baptist Church, The American Legion, Seward County Farm Bureau, The Hospital Auxiliary, and the Chamber of Commerce. He was a volunteer for the American Red Cross. John dedicated his life to the service of the Lord, with the goal of bringing as many people to the Lord as he could. Mr. Malin is survived by his wife of 69 years Beverly, Son Randy Malin of Liberal, Daughters Valerie Jean Mardick and her husband Bruce of Berthoud, Colorado, and Beverly Michelle Brien and her husband Tom of Paradise, Texas. Surviving Siblings, Ralph Malin and his wife Carole of Newton, Kansas and Estelle Boles and her husband Steve of Estes Park, Colorado. His sister in law Dee Leete of Liberal. John is the Grandfather of 6, Jennifer Malin, Jason Malin, Jarod Mouser, Ryan Mouser, Marissa Petrilli Roush and her husband Mitchell, and John Michael Petrilli and his wife Megan, and the great-grandfather of 8, Jessica, Aspen, Landon, Kurt, Cameron, Sophia, Emma and Alex. He was preceded in death by His Parents, one son Anthony Earl “Tony” Malin and one brother Wallace Edward “Fuzz” Malin. Visitation will be Friday, September 4th, 2020 from 2:00 PM to 8:00 PM at the Hornung Family Funeral Home, 1212 West 2nd Street, Liberal, Kansas. Family will be present to greet friends from 5 to 7pm. The Funeral Service will be Saturday, September 5, 2020 at 10:00 AM, at the Fellowship Baptist Church, 310 West Pancake Blvd., Liberal, Kansas. Interment will follow at the Liberal Cemetery. Pastor Tyler Prater will officiate the services. Memorial Contributions may be made to the Cal Farley Boys Ranch or the Southwestern College in care of the Hornung Family Funeral Home.

The family of John David Malin created this Life Tributes page to make it easy to share your memories.

Send flowers to the Malin family.