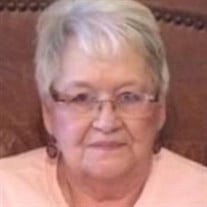 Joyce Elaine (Cole) Hines, passed away at home in Liberal, Kansas on July 27, 2021. She was born o March 30, 1938, to George William and Mildred Louise (McHenry) Cole in Iola, Kansas, she was the third child of five born to her parents and made her entrance within minutes after the birth of her fraternal twin Jerry Elwin. Iola was her home all her childhood, she always spoke fondly of the house on Third St, where she lived with her family into her early adulthood. In Iola she met Robert “Bob” Ronald Hines, whom she married on September 1, 1957. Two weeks after the wedding Bob was drafted and sent to Korea, and they spent the first 15 months of married life separated. After Bob returned the adventure began. Moving and shuffling homes for the next 21 years they finally landed in the Oklahoma Panhandle where she resided for the most part, the rest of her life. Along the way additions were made to the family, two daughters Susan Lynn (Hines) Miller and Sara Jane Hines. After her divorce from Bob in 1978, she took on many challenges as a single mom. She was fearless and strong and taught her daughters, by example, how to be the same. Joyce had many jobs during her life, movie theater attendant, worked in an ice cream parlor, cake decorator, owner and operator of her own beauty salon, worked as a florist, bank teller, secretary and more, but her most important; job was being a mom. In 1979, when a grandson was added to the family, grandmother was added to her resume. Lovingly referred to as Grandma J by her grandson, Brack Ray Miller, grew up, met, married, and added to the family with a wife, Kimberly, and a bit later two sweet great grandchildren, Riley Kaye, and Cooper Ray. Joyce loved to read, especially a good murder mystery, watching chick flicks and any tv show about animals, but she had many interests, mostly creating things, cross stitching, crocheting, a pretty good artist, although she didn’t think she was, painting faces on pumpkins for Halloween or drawing on paper lunch bags for school. She loved her family fiercely and taught her children how to love the same way. She will be very missed by her siblings, her daughters, grandson and great grandchildren, nieces, and nephews. And numerous family and friends. She was the touch stone, the cheerleader, and our beloved Mom. We must remember that she helped make us strong so that one day we would be able to carry on without her. She is survived by her two daughters, Susan Miller, Beaver, Oklahoma, and Sara Hines, Liberal, Kansas. One grandson, Brack (Kimberly) Miller, Luther, Oklahoma, two great grandchildren, Riley, and Cooper. Her sister, Shirley Lovett of Rohnert Park, California, three brothers, Jerry (Leona) Cole of Edmond, Oklahoma, Bobby (Paula) Cole of Collinsville, Oklahoma, and Donald (Jessie) Cole of Tulsa, Oklahoma, and numerous nieces and nephews, and many friends that thought the world of her. Visitation will be 1:00 PM – 8:00 PM Friday, July 30, 2021, the family will be present 5:00 PM - 8:00 PM at the Hornung Family Funeral Home 1212 W. 2nd Street Liberal, Kansas Graveside Service will be at 11:00 AM Saturday, July 31, 2021, Round Mound Cemetery in Sedan, Kansas. In lieu of flowers donations suggested to the American Heart Association or Angels for Animals in care of Hornung Family Funeral Home. Condolences may be sent to the family at www.hornungfuneralhome.com

Joyce Elaine (Cole) Hines, passed away at home in Liberal, Kansas on July 27, 2021. She was born o March 30, 1938, to George William and Mildred Louise (McHenry) Cole in Iola, Kansas, she was the third child of five born to her parents and made... View Obituary & Service Information

The family of Joyce Elaine Hines created this Life Tributes page to make it easy to share your memories.

Send flowers to the Hines family.