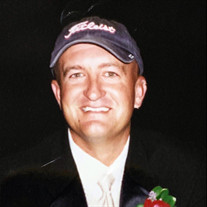 Keith Michael Clumsky, 45, died Monday, October 7, 2019 at his residence in Liberal, KS. He was born on February 6, 1974, the son of Steve Clumsky and Susan (Smith) Leggett in Hutchinson, KS. Keith graduated from Liberal High School in 1992. He worked in the Oil and Gas industry as a consultant and a Drilling Superintendant. Keith was a fan of the Denver Broncos and the Texas Longhorns. He loved Golf, Bowling, Drag Racing and Baseball. He was a loving Liberal BeeJay host family for many years. Keith leaves behind one son, Cooper James Clumsky, a sophomore at Liberal High School, and his mother, Kimberly Sherer. He is also survived by two stepsons, Conner Warren of Liberal, KS and Tanner Warren of Maricopa, AZ. He is leaving behind his twin brother, Kelly Stephen Clumsky and his wife Shelly of Thorton, CO. He is also leaving behind a niece, Kalie Sieger and nephew Jesse Taylor, both of Thorton, CO. Keith leaves behind his mother, Susan Leggett and stepfather, Gary Leggett of Tulsa, OK; father Steve Clumsky and stepmother Fonda Clumsky of Booker, TX. He leaves his grandfather, Ron Brown of Perryton, TX. Keith also leaves behind uncles, many cousins and friends. Keith was preceded in death by his maternal grandparents, Sam and Verna Smith of Shreveport, LA, LaFon Brown of Perryton, TX and Anne and Jim Clumsky of Liberal, KS. Memorial Services will be 2:00pm Friday, October 11, 2019 at the Brenneman Funeral Home Chapel with Pastor Fred Huff presiding. Public visitation will be Thursday, October 10 from 5pm-7pm at the Brenneman Funeral Home Chapel. Memorial contributions may be made to The Cooper Clumsky Education Fund, in care of the Brenneman Funeral Home 1212 W. 2nd Liberal, KS 67901. Condolences may be sent to the family at www.brennemanfuneralhome.com

Keith Michael Clumsky, 45, died Monday, October 7, 2019 at his residence in Liberal, KS. He was born on February 6, 1974, the son of Steve Clumsky and Susan (Smith) Leggett in Hutchinson, KS. Keith graduated from Liberal High School in... View Obituary & Service Information

The family of Keith Michael Clumsky created this Life Tributes page to make it easy to share your memories.

Send flowers to the Clumsky family.