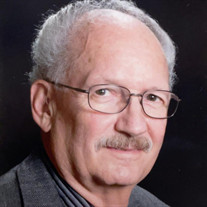 Keith Edwin Glunt, 74, went home to the loving arms of Jesus on Sunday, January 23, 2022, at the Northwest Texas Hospital in Amarillo, Texas. He was born on June 2, 1947, the son of Oral E. and Anna Belle (Wheeler) Glunt in Dodge City, Kansas. Keith grew up living on the family farm near Jetmore, Kansas. Keith first met Phyllis Smith as a child when both attended Sunday School at Jetmore First Baptist Church. Phyllis’ family later relocated from Jetmore to Liberal when she was 12. After graduating from their respective high schools, the two met again when they were reintroduced unknowingly on a blind date. They were united in marriage on December 16, 1967, in Liberal, Kansas, at the First Baptist Church. Keith worked at Kenworth of Liberal for over 10 years as a service writer until his retirement. Prior to working at Kenworth, Keith worked for several companies including Wes-Kan Oil Company as a Fuel Delivery Driver for 10 years, Freightliner of Liberal as a Service Writer for 5 years, and National Carriers as a Livestock Division Manager for 16 years. While in retirement, Keith recently started a part-time role at Hornung Family Funeral Home as a Funeral Assistant. Keith was a very active member of the First Baptist Church of Liberal, where he was a Deacon for many years. He was often working on projects at the church, and he was always a caring and helping person to others in his community. Keith never knew a stranger. He never turned down anyone so he was often busy with friends and strangers alike dealing with their needs that may have included driving friends to distant doctor appointments, fixing something broken, or just talking. Keith also enjoyed long road trips to visit family. Keith is survived by his wife, Phyllis, currently retired and living in Liberal, Kansas. 2 Sons and 5 Grandchildren Kevin Glunt and his wife, Angela , of Shawnee, Kansas, and their sons Joshua and Andrew Layne Glunt and his wife, Joan, of Ottawa, Illinois, and their sons Colby and Landon and daughter, Avery 1 Sister Ruth Poe and her husband Chuck of Wentzville, Missouri He was preceded in death by his parents, and brother Verl E. Glunt of Dodge City, Kansas. Visitation will be on Friday, January 28, 2022, at the Hornung Family Funeral Home, 1212 W 2nd Street, Liberal, Kansas from 2pm to 7pm. The family will be present to greet friends from 5pm to 7pm. Funeral Services will be at 10am, Saturday, January 29, 2022, at the First Baptist Church, 204 N. Sherman Ave, Liberal, Kansas, 67901, with Jonathan Zamora presiding. Burial to follow at the Liberal Cemetery, 1900 W 15th Street. The family requests that memorial contributions be made to the First Baptist Church, in care of the Hornung Family Funeral Home at 1212 W. 2nd, Liberal, KS 67901. Condolences may be sent to the family at www.hornungfuneralhome.com

Keith Edwin Glunt, 74, went home to the loving arms of Jesus on Sunday, January 23, 2022, at the Northwest Texas Hospital in Amarillo, Texas. He was born on June 2, 1947, the son of Oral E. and Anna Belle (Wheeler) Glunt in Dodge City, Kansas.... View Obituary & Service Information

The family of Keith Edwin Glunt created this Life Tributes page to make it easy to share your memories.

Send flowers to the Glunt family.