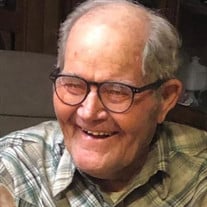 Kenneth Newton Powell, age 92, passed away in the afternoon of Wednesday, March 30, 2022, at Wheatridge Park Care Center in Liberal, Kansas. He was born on August 2, 1929, the son of William Sherley Powell and Ethel Viana Powell (Cromer) on the family homestead near Anna, Texas. Kenneth was the seventh of ten children. He spent his last years in Liberal, Kansas, under the care of his loving daughter Brenda. Later, Kenneth would move to Wheatridge Care Park, where he was cared for. Kenneth married the love of his life, Vera Dean Poteet on June 15, 1952, in Cone, Texas. Ken and Vera loved to share how Vera would always flirt with him in cotton field by jumping on is cotton sack. Little did she know one day when Kenneth was on leave she would receive a kiss from Ken in that cotton patch. The couple had a great life together. Through good times and bad, they were always by each other’s side. They enjoyed raising both their children in Nara Vista, NM, where they enjoyed farming and ranching. Later the couple moved to North Texas where they worked until they moved back to Floydada to spend their retirement years where their love story began. The couple was a little over two months short of their 70th wedding anniversary. Kenneth loved his children and grandchildren very much. He also loved his church family and looked forward to attending church every Sunday. Ken was full of laughter and mischief when his was younger. He also loved teaching his kids and grandkids how to do things. He always enjoyed taking them places and cooking for them. If you knew Ken, you knew you were always welcomed and knew you would be loved. He served in the Navy during the Korean War on the USS Osprey AMS 28 and the USS Incredible AM 249. During his time in the navy, He had the honor of receiving a Presidential Citation for leading the USMC through the fog and getting them safely out of the mine infested waters. He took pride in sharing his Navy Stories. He was the father of one son, Kenneth Earl, and one daughter, Brenda Kay. Kenneth was a farmer, rancher, and carpenter. He was a member of the Primitive Baptist Church in Floydada, Texas and a Lifetime member and Chaplain for 20 years of VFW – Post 3166, Liberal, Kansas. Kenneth is survived by his wife, Vera Dean Powell (Poteet) of Liberal, Kansas Son, Kenneth Earl Powell and wife, Melody of Iowa Park, Texas Daughter, Brenda Kay Mallory and husband, Dusty of Liberal, Kansas Five grandchildren, Trixy Mallory-Toth, Aaron Mallory, Steven Powell, Stephanie Keel, and Jeremy Powell. Eleven great grandchildren, Preston, Elisia, Natalie, Trystan, Brighton, Pyper, Nikki, Makayla, Madison, Jonathen, and Logan He was preceded in death by Both of his parents, William and Ethel Powell One great great grandson, Maverick Four brothers, Edward, W.D., Fletcher and Tillman Five sisters, Carrie, Catherine, Frieda, Dessa, and Mary Francis Funeral Services will be held in Floydada, Texas under the care and direction of Moore-Rose Funeral Home. Interment will be in the Floydada Cemetery. Local arrangements in care of Hornung Family Funeral Services. No services will be held locally. Condolences may be sent to the family at www.hornungfuneralhome.com Hornung Family Funeral Home, 1212 W. 2nd Street, Liberal, Kansas

Kenneth Newton Powell, age 92, passed away in the afternoon of Wednesday, March 30, 2022, at Wheatridge Park Care Center in Liberal, Kansas. He was born on August 2, 1929, the son of William Sherley Powell and Ethel Viana Powell (Cromer) on... View Obituary & Service Information

The family of Kenneth Newton Powell created this Life Tributes page to make it easy to share your memories.

Kenneth Newton Powell, age 92, passed away in the afternoon of...

Send flowers to the Powell family.