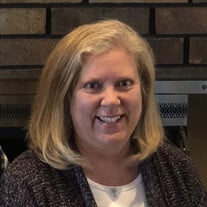 Kimberly Anne Hay, age 54, died Wednesday February 12, 2020, at her home in Liberal, Kansas. She was born February 22, 1965 in Concordia, Kansas the daughter of Leland Lund and Marion (Naslund) Lund of Clay Center, Kansas. Kimberly graduated from Clay Center High School in Clay Center, Kansas in 1983. Then graduated from Fort Hays State University in 1987 with a bachelor’s degree in Finance. She was the Executive Director of the Cooper Clark Foundation. She met the love of her life, Craig Hay, while they both attended Fort Hays State University and were married in 1987 in Hays, Kansas. In their 32 years of marriage they raised two wonderful children, Joshua and Shelby Hay, and in December 2019 the family grew with the addition of their first grandchild, Beckett Hay. Kim dedicated her life to her family, her community, and enjoyed the company of her Beta Sigma Phi sisters. She was also a brilliant quilter, warming many loved ones with more blankets than they can store. She also loved traveling with her family, frequently visiting Manhattan in the last four months to be with her granddaughter as much as possible. Kim and her family are members of First Baptist Church. She is survived by her loving husband, Craig. Son Joshua Hay of Riverside, Missouri Daughter Shelby Hay of Manhattan, Kansas Sister Carmie (Bob) Pfenning of Galeton, Colorado and their children Nick Pfenning and Lindsay Pearson. Grand Daughter: Beckett Hay Mother and Father in law: Jay and Kay Hay Brother in Laws: Rod (Michelle) Hay and their children Riley, Whitney, and Reece Brian (Jobeth) Hay and their children Jayton and Jarren Scott Hay Kim was preceded in death by her parents Leland and Marion Lund. Visitation will be Monday, February 17, 2020 from 9AM – 8PM with family available to greet friends from 5PM – 8PM. Funeral Service will be Tuesday February 18, 2020 at 2:00PM at First Baptist Church, 204 N Sherman Ave in Liberal, Kansas with Pastor David Bagwell presiding. Burial to follow at Liberal Cemetery. Memorial Donations are suggested to Beta Sigma Phi in care of Brenneman Funeral Home 1212 W. 2nd St. Liberal, Kansas. 67901. Condolences may be sent to the family at www.brennemanfuneralhome.com

The family of Kimberly Anne Hay created this Life Tributes page to make it easy to share your memories.

Send flowers to the Hay family.