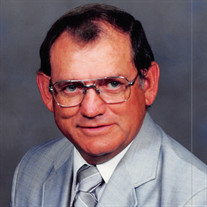 LeRoy Joseph Ruder, age 78, passed away Friday, August 12, 2016 at Wheatridge Park Care Center in Liberal, KS. He was born May 16, 1938 to Anton and Anna (Wasinger) Ruder in Hays, KS. He attended Sunnyside School all eight years and was a 1956 graduate of St. Joseph’s Military Academy in Hays. After graduation, he enlisted in the Army and served two years stationed in Germany. LeRoy married Norma Jean Pfeifer on April 30, 1962 in Hays, at St. Joseph’s Catholic Church with Fr. Alfred Carney as Celebrant. They had three children, Vincent, Michael, and Ann Marie. LeRoy worked for the Boogaart Grocery Chain in Hays, where he started as a sacker and carry-out and trained to be Manager. He was promoted and transferred to Mankato in 1968 as manager. In 1973, LeRoy was moved to Liberal where he managed the store for two years. For a short time, he was a salesman selling Lawson Products. In 1976, LeRoy and his wife, Norma, co-founded an interior decorator business named Ruder’s Draperies. They operated the business until they retired in 2011. They were very blessed meeting many wonderful people through their business and enjoyed living in Liberal. LeRoy was a member of the Mankato Jaycees, the Liberal Noon Lions Club and the Elks Lodge in Beloit and Liberal. He was a lifetime member of the Knights of Columbus participating in councils at Schoenchen, Superior, NE and Liberal. Hobbies included hunting, fishing, playing cards, and fantasy football. LeRoy was an avid sports fan and supported the Liberal Redskins Football and Basketball teams and the SCCC Lady Saints and Saints Basketball Teams. He loved to play pool and was a member of the Billiard Association in Liberal for many years. LeRoy is survived by his wife, Norma, of the home, Vincent (Janet) of Kemah, TX, Michael (Jennifer) of Olathe, KS and their children, Harrison, Winifred and Thatcher and Ann Marie of Liberal and her son, Tyler Dean Ruder, and two great grandchildren, Rebecca and Adrian. He is also survived by two brothers, Robert (IIa Mae) Ruder of Hays and Earl (Mary) Ruder of Edmond, OK, and his sister, Diana Dome of Hays, and numerous nieces and nephews. LeRoy was preceded in death by his parents and a brother-in-law, Benjamin Dome, and a very dear cousin and hunting buddy, Delvin Wasinger. SERVICES PLANNED FOR LIBERAL, KANSAS: Vigil and Rosary will be 7:00pm Sunday at St. Anthony Catholic Church in Liberal. Funeral Mass will be 10:00am Monday, August 15th, at St. Anthony Catholic Church of Liberal. Visitation will be held 1 – 5pm Sunday at Brenneman Funeral Home with the family present to greet friends from 2 – 3pm at the funeral home Memorials can be made to St. Anthony Catholic Church in care of Brenneman Funeral Home 1212 W. 2nd Liberal, KS 67901. FOLLOWED BY SERVICES IN HAYS, KANSAS: Vigil and Rosary will be 6:30pm Monday at Hays Memorial Chapel in Hays. Funeral Mass will be 3:00pm Tuesday, August 16, 2016 at St. Joseph Catholic Church in Hays with burial to follow at St. Joseph Cemetery, Hays. Visitation will be from 5 -8pm Monday and from 1:30 – 2:45pm Tuesday at Hays Memorial Chapel. Memorials can be made to St. Joseph Catholic Church in care of Hays Memorial Chapel 1906 Pine St. Hays, KS 67601.

LeRoy Joseph Ruder, age 78, passed away Friday, August 12, 2016 at Wheatridge Park Care Center in Liberal, KS. He was born May 16, 1938 to Anton and Anna (Wasinger) Ruder in Hays, KS. He attended Sunnyside School all eight years and was a 1956... View Obituary & Service Information

The family of LeRoy Joseph Ruder created this Life Tributes page to make it easy to share your memories.

Send flowers to the Ruder family.