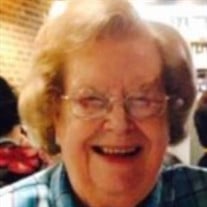 Lois Wren, 88, died Thursday, September 24, 2020 at Wheatridge Care Park in Liberal, KS. She was born on October 4, 1931, to John Hal and Alma Blanche (Springer) Williams in Cuates, NM Lois went to high school in Garden City, KS. She then went to Clayton, NM, where she worked for the telephone company and lived with her grandmother. She married Robert Cresswell of Des Moines in 1951 at Clayton, NM. They moved to Liberal in 1960, where she worked for the City as a clerk in the Water Department for 18 years. She then worked for 2 years for Beech Aircraft. Lois also worked for Kerri Lynn’s Flowers & Design for 2 years, retiring in 2002. In 1968, she married George Wren in Liberal, KS. Lois was a member of the First United Methodist Church and loved to sew quilts. She was a great cook, known for her homemade noodles, clam chowder, and homemade stuffing during the holidays. She also enjoyed Texas hold’em poker, playing often with her friends. She is survived by: 1 Daughter Starla Hill and Bill Hill Liberal, KS 1 Brother Lee Williams and his wife Shirley Vian, OK Grandchildren Kelly Hill and his wife Liz Liberal,KS Kerri Guffey Liberal, KS Darrall Guffey Liberal, KS 2 great grandchildren Beckett and Hollin Hill She was preceded in death by her parents, her husband George Wren, and her son Jerald Creswell. Funeral Services will be at 10am, Tuesday, September 29, 2020 at the Hornung Family Funeral Home Chapel, 1212 W 2nd Street, Liberal, KS, 67901, with Pastor Jeff Mitchell presiding. Visitation will be Monday, September 28, 2020 from 12pm to 7:30pm at the Hornung Family Funeral Home. The family will be present to greet friends from 5:30 to 7:30pm Memorial contributions may be made to the Liberal Animal Shelter, in care of the Hornung Family Funeral Home 1212 W. 2nd Liberal, KS 67901. Condolences may be sent to the family at www.hornungfuneralhome.com

The family of Lois Violet Wren created this Life Tributes page to make it easy to share your memories.

Send flowers to the Wren family.