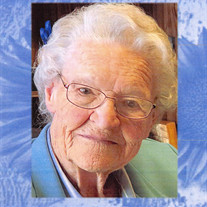 Lola Winifred Claar McVey, 96, died on January 11, 2020 at Brookdale Assisted Living in Enid, OK, surrounded by her loving family. Lola was born on February 21, 1923 near Lakin, KS. She was the 3rd child and oldest daughter of Thomas and Anna Katrina (Kieft) Claar. She graduated from Highland Park High School in Topeka, KS. She received a 10 hour teacher training certification at Fort Hays State University and began her teaching at Banner School, a one room school house in Seward County. She continued her love of teaching at the Kismet Grade School. She met another teacher, Ernest McVey, who happened to be teaching band classes. Finding reasons to go to the band room after school, she shared with her fellow single lady teachers that she “was going to marry him one day”. They married in June of 1947 at Kismet United Brethren Church, and made a home in Kismet. In 1948, they went to Lindsborg, KS, where they both taught. They then returned to Kismet, where they continued to teach and ran the family farm one mile south of Kismet. In the 1960’s, Lola enrolled and graduated from Wichita University, where she obtained a degree in Speech Pathology. Lola then worked with students from surrounding schools that had speech difficulties. Her work was so well known that she was called on by medical professionals to help with stroke victims, and foreign professionals to help with English. Lola was still teaching on her 80th birthday. Lola also owned Helping Hands Preschool based out of her home. She was the secretary/treasurer of the Kismet Cemetery District for many years. Lola was the publisher of the Kismet Klipper newspaper for 34 years, and a member of Daughters of the American Revolution, American Speech & Hearing Association and a volunteer for Southwest Medical Center. She is survived by: Daughter Marlyn Dyer and her husband Phil Son Gene McVey and his wife Bobby Daughter in law Cathy McVey Grandchildren Tina Seaborn (Doug), Eric McVey, Andy (Julie) Dyer, and Kelly (Joe) Farmer. Great Grandchildren Allison McDonald (Rodney), Chandler Dyer, Kody McVey, Cameron Bowlby and Blaine Dyer. Sisters Mary Harrison, Evelyn Bryan, Roma Spear (Ernie) and Patty Barth (Alan). She was preceded in death by her husband, Parents, Son Raymond McVey, 4 Brothers; George, Russell, Frank and Donnie Claar, twin sisters Mildred and Mabel, granddaughter Cindra Dyer, great grandchildren Austin, Joshua and Ruth Dyer, brothers in law Don Harrison and Charles Bryan. Visitation will be from 3pm to 5pm Sunday, January 19, at Brenneman Hornung Funeral Home. Funeral Services will be 2:00pm, Monday, January 20, 2020, at Kismet United Methodist Church, with Pastor Terry Mayhew presiding. Burial to follow at Kismet Cemetery. Memorial contributions may be sent to Kismet United Methodist Church or a charity of your choice, in care of the Brenneman Funeral Home 1212 W. 2nd Liberal, KS 67901. Condolences may be sent to the family at www.brennemanfuneralhome.com

Lola Winifred Claar McVey, 96, died on January 11, 2020 at Brookdale Assisted Living in Enid, OK, surrounded by her loving family. Lola was born on February 21, 1923 near Lakin, KS. She was the 3rd child and oldest daughter of Thomas and... View Obituary & Service Information

The family of Lola McVey created this Life Tributes page to make it easy to share your memories.

Send flowers to the McVey family.