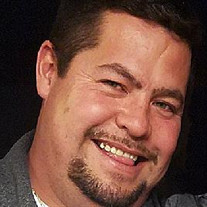 Luis Eduardo “Momo” Moreno died Wednesday, November 15, 2017, in Sherman County, Texas. He was born on January 20, 1978, in CD Delicias, Chihuahua, Mexico. He was the son of Eduardo Moreno Jimenez and Barbara Chavira. He was a loving father and husband, whose perseverance and dedication to his family was unparalleled by any. As a man who instilled values such as hard work and kindness to fellow man, he lived ensuring these values where what defined him. Throughout his life he did what he loved, from a fascination of raising and racing horses to building and woodworking, he lived so that no day was wasted. Eduardo will be dearly missed by all who love him and may he rest in in the paradise he deserves. He was married to Nancy P. Moreno. She survives. Survivors include: His parents 3 Sons Antonio Moreno Liberal, KS Cesar Moreno Liberal, KS Christopher Moreno Liberal, KS 1 Daughter Diana Moreno and her husband, Armondo Encinias New Mexico 1 Brother Salvador Moreno CD Delicias, Chihuahua, Mexico 2 Sisters Maribel Moreno CD Delicias, Chihuahua, Mexico Marina Moreno CD Delicias, Chihuahua, Mexico 4 Grandchildren Ray, Jasmine, Dominic and Xvaier Sena. He was preceded in death by his son, Eduardo “Sockey” Moreno. Rosary and vigil service with be at Brenneman Funeral Home Monday, November 20 at 7:00 pm. Funeral Mass will be 2:00 pm Tuesday, November 21 at Saint Anthony of Padua Catholic Church with Father Jacob Schneider presiding. Memorial contributions can be made to Brenneman Funeral Home, to assist with Luis’s final expenses, in care of the Brenneman Funeral Home 1212 W. 2nd Liberal, KS 67901. Condolences may be sent to the family at www.brennemanfuneralhome.com

The family of Luis Eduardo Moreno created this Life Tributes page to make it easy to share your memories.

Send flowers to the Moreno family.