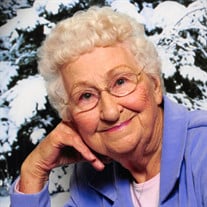 Margaret Linda Bissett, 90, died Friday, April 19, 2019, at the Homestead Estates care facility in Liberal. She was born on September 25, 1928 in Susank, KS, the daughter of Andrew and Katherine (Schmidt) Baum. She graduated from Gorham High... View Obituary & Service Information

The family of Margaret Linda Bissett created this Life Tributes page to make it easy to share your memories.

Send flowers to the Bissett family.