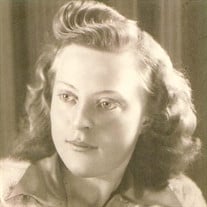 Maria Francesca Hook age 95, died Saturday, January 16, 2021 at Good Samaritan in Liberal, Kansas. Maria was born on August 15, 1925, in the beautiful Alps in Ovedasso di Moggio Udinese, Italy the daughter of Constantino and Maria Tomat Franz. As a young girl, she became a companion to the children of an olive plantation owner. Maria accompanied the family as they had homes in both Rome and Turin. When Italy joined WW II in 1940, Maria returned home to Ovedasso. She often told of hiding in the mountain caves with her mother and sisters to avoid both the German soldiers and the bombing. As the war waged on, Maria along with her cousin Franka were ordered to a nearby village where the young women entered a work camp ran by the Nazis. Both women witnessed many atrocities that were too painful to talk of, but somehow, they survived. Maria often talked about looking up one day and seeing the Nazis flee by jeep, car, horse and foot completely abandoning the camp. The Americans had come! After the two saw the kindness of the American soldiers, Maria and Franka took in the American GI's laundry. Two of their favorite customers were George Hook and Alex Peeto. Franka married Alex and Maria married George on New Year’s Eve, December 31, 1946 in Trieste, Italy. Both couples headed to the United States. Maria and George departed Trieste, Italy in 1947, boarding the USS Hershey. Entering through Ellis Island the couple made their way to Liberal, Kansas getting off the train at the Rock Island Depot. Their first home was in Baker, Oklahoma, where they lived for 65+ years Together they had 2 beautiful daughters, Ellen Pelton and Lidia Hook Gray. Maria missed her Alps so she planted trees making her yard the shadiest in town. She also planted a huge garden, raised chickens and ducks, planted more trees and transplanted grape vines. Maria was still gardening at 90 years old. Maria became a United States citizen in 1956. Maria was a member of Kansas Historical Society Survived by: Ellen Pelton of Turpin, Oklahoma Lidia and her husband Wayne Gray of Liberal, Kansas. Kara Pelton of Blanchard, Oklahoma Amanda Ireland of Turpin, Oklahoma Maria was preceded in death by both her parents, Constantino and Maria Franz, her beloved husband George Hook, her sisters Elena Franz and Lidia Zanavor, her brother and sister-in-law Ivan and Leona Hook. Her brother-in-law Pete Pelton The family would like to extend a thank you to the staff at the Good Samaritan that gave Maria such wonderful loving care. Private visitation was held on Tuesday, January 19, 2021.

The family of Maria Francesca Hook created this Life Tributes page to make it easy to share your memories.

Send flowers to the Hook family.