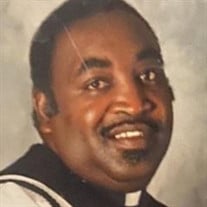 “God’s Miracle Man” Elder Melvin Lewis Tatum Sr., 73, was born on July 26, 1948, to Melvin and Peggy (Thomas) Tatum in Mexia, TX, and received his “Eternal Reward” on August 28, 2021. Melvin attended school in Odessa and Tulia, TX. He was an OUTSTANDING math student and received numerous AWARDS for his ACHIEVEMENTS! Because of his personality, character, and sense of humor, he would have received an innumerable amount of “AWARDS” in sentences, detention, and swats for his “COMEDIC FLAIR” if it were possible, and if it had NOT been for his mother, Mrs. Peggy Tatum. Why? EVERYONE knew that Melvin Lewis was Mr. Comedy! He was also a AMAZING baseball player; in fact, after graduating from Tulia High School, he traveled to play baseball and was recruited by the Negro Baseball League. He loved baseball, but his love for Patsy surpassed his love for “America’s Favorite Pastime”. In 1960, Patsy White transferred from Dallas to Tulia, TX, and he fell in “LOVE” the very moment she waltzed into his 6th-grade classroom. At age 12, he proposed and reassured her that she would be his wife (She retaliated, “NO!”), yet he asked Mother Dearo White for her blessing. While waiting, he worked in the cotton fields and on the farms with his favorite uncle, Uncle Black Cap. In 1972, Patsy fell in LOVE but told him that she wouldn’t marry him until he accepted the Lord as his Savior. God reclaimed Melvin on August 1, 1973, and Patsy on August 5, 1973, and he married his ONE TRUE LOVE, on August 6, 1973. Through their union, God blessed them with the “Fab Five”. After their union, Melvin and Patsy became dedicated members of Jackson Chapel C.O.G.I.C. He became an ordained elder and served diligently in Sunday School, YPWW, Brotherhood, Pastor’s Aide, and as an evangelist under the leadership of Supt. Henry L. Jackson. He served as a representative on 12 counties’ committees providing assistance to those in need, and he helped to rebuild the City of Tulia and other surrounding areas. In 1985, he relocated his family to Liberal, KS, to pastor Holy Sanctuary C.O.G.I.C. and labored in various appointed positions under the leadership of Supt. BD Williams and Supt. Lawrence Johnson in the J.O. Patterson District. In 1987, God gave him a vision to transition and restore the oldest African-American church that stood as a historical sight older than the city of Liberal, itself. This restoration began the birth of Deliverance Powerhouse C.O.G.I.C. Throughout the years, God used him as a vessel to evangelize and prophecy in numerous cities where many were healed and delivered. Pastor Tatum endured a plethora of trials, obstacles, and tribulations throughout his 73 years of life. He survived falling 27’ off a grain elevator onto his head on concrete; facial reconstruction; multiple brain surgeries; 3 broken noses; 3 ruptured aneurysms and being the FIRST person to undergo an operation of incorporating silicon balloons and clips; prostate cancer, reviving after being pronounced dead on 3 separate occasions, and so many other miracles. Elder Tatum leaves behind a rich legacy of healings and miracles, and he will ALWAYS be remembered as “God’s Miracle Man.” Pastor Tatum is survived by his children--Jacqueline Cohens of Houston, TX, Kim Franklin, Melvin (Thyja) Tatum Jr., of Liberal, KS; Cedric (Misty) Tatum of Tahlequah, OK, and Melody (John) Tatum-Green of Liberal, KS. One sister-Patsy Brown of Houston, TX. 31 Grandchildren, 22 Great-Grandchildren, and a host of nieces, nephews, cousins, friends, and church families who loved him dearly. Elder Melvin Tatum was preceded in death by his “Love”-Evangelist Missionary Patsy R. Tatum; his parents-Melvin and Peggy Tatum; and three sisters-Fannie Lee Gentry, Ola Mae Goodwin, and Evang. Missy. Felictima Brown. Visitation will be from 11:00 AM – 8:00 PM, Friday, September 3, 2021, at Hornung Family Funeral Home, 1212 W. 2nd Street, Liberal, Kansas Memorial Services will be held Saturday, September 4, 2021, at 9:00 AM at All Nations Church, 601 East 15th St. Liberal, KS. The “Tatum Family” will have a burial service Tuesday, September 7, 2021, at 10:00 AM. Dinner will be served at Bibleway COGIC 410 E 8th St, Liberal, KS 67901 immediately after the Memorial Service. Memorials are suggested to Pastor Melvin L. Tatum ℅ Melody Green--Hornung Family Funeral Home 1212 West 2nd Liberal, KS 67901.

The family of Melvin Lewis Tatum Sr. created this Life Tributes page to make it easy to share your memories.

Send flowers to the Tatum family.