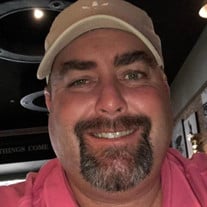 Michael “Mike” Scott McGinley, age 49, died Wednesday, June 2, 2021, in Kismet, Kansas. He was born on March 19, 1972, son of William Scott and Sandra Jean McGinley in Dodge City, Kansas. Mike graduated Great Bend High School in 1990 and later attended KSU in Manhattan, Kansas. Mike was an active member of the community and belonged to many clubs which included the Liberal Country Club as a member of the Board of Directors. He was an Alumni Associate of K-State, Southwest Kansas Cat Backers member and an esteemed member of The Classic Tournament Committee. Mike was a co-owner of Agri Center in Plains, Kansas and was a top 10% nationwide producer for Pioneer. He was known to work hard but most importantly play hard. On February 4, 2013, Mike and Monica were married in Hawaii. They enjoyed time with family and friends watching K-State football, playing golf and making every minute of life count. Everyone that spent time with Mike knew they were going to have a great time if he was in the room. He will forever be remembered as the life of the party and will be missed sorely by all. In addition to being so full of life, Mike was also there to help anyone in need. He would be the first one there to help you out and the last one to leave. If Mike were in your corner, you didn’t need much else. Survived by: His wife, Monica McGinley of Liberal, Kansas His daughter, Brayleigh McGinley of Kismet, Kansas His stepson, Auston Dunnam And stepdaughter, Bella Dunnam both of Liberal, Kansas His father, William and stepmother, Marie McGinley of Wichita, Kansas Two brothers, Brian (Mary) McGinley of Augusta, Kansas And Dave (Katie) McGinley of Wichita, Kansas And a host of nieces and nephews Mike was preceded in death by his mother, Sandra Jean McGinley, his grandparents, Tom and Jean Allingham, and William and Wanda McGinley. Uncles Richard McGinley, Dan McGinley, and Tom McGinley as well as his best friend Toby Hicks. Visitation will be 9:00 AM – 5:00 PM, Wednesday, June 9, 2021, at the Hornung Family Funeral Home 1212 W. 2nd Street Liberal, Kansas. Funeral Service will be 11:00 AM, Thursday, June 10, 2021, at First Southern Baptist 621 N. Western Liberal, Kansas with Reverend Jeff Mitchell presiding. In addition, Mike recently told Monica that if he ever passed away that there had better be one huge party in his honor. For that reason, we are requesting everyone attend the Liberal Country Club immediately following the funeral service for Cold Bud Light, a Taco bar and countless stories that will help us all say goodbye to one of the greatest friends any of us will ever know. See you all there on #1 Tee Box. In lieu of flowers, donations suggested to the McGinley College Fund for his children in care of Hornung Family Funeral Home. Condolences may be sent to the family at www.hornungfuneralhome.com

The family of Michael "Mike" Scott McGinley created this Life Tributes page to make it easy to share your memories.

Send flowers to the McGinley family.