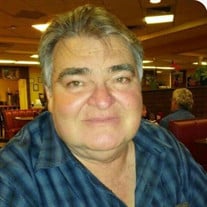 Michael Logan Starkey, 66, died Friday, October 1, 2021, in Liberal, Kansas. He was born August 6, 1955 in Guymon, Oklahoma he was the son of Victor Logan Starkey and Julia Zelma Woods. He attended Guymon High School in Guymon, Oklahoma graduating in 1973. After High School, Michael enlisted in the United States Army. He was stationed at Fitzsimmons Army Hospital, where he was a Military Police Officer. While there, he met an Army nursing student who became the love of his life. On June 21, 1975 he married Dorothy Hess in Denver, Colorado. She survives. He was a police officer in Guymon, Oklahoma. He also worked in the oil field working for Weatherford International, where he was a service supervisor. He loved to spend time with his grandkids, he loved animals and to feed strays, and he loved motorcycles. He was the beloved father of two sons, Christopher Logan Starkey, and wife, Lindsay Starkey, of Liberal, Kansas, James Samuel Starkey, and wife, Cassie Starkey, also of Liberal, Kansas. He was also the beloved brother of Mildred Jones of Pearland, Texas He was the proud grandfather of Shanna Starkey, Zoey Starkey, Peyton McDaniel, Everlee Colter, Clara Starkey, and Harley Starkey He is preceded in death by his parents, brother Edward Starkey, and Brother in-law Roy Jones. Memorial Service will be held at First Christian Church at 11:00AM on Saturday, October 9, 2021. Memorial contributions may be sent to the St. Jude’s Children’s Hospital, in care of the Hornung Family Funeral Home 1212 W. 2nd Liberal, KS 67901. Condolences may be sent to the family at www.hornungfuneralhome.com

The family of Michael Logan Starkey created this Life Tributes page to make it easy to share your memories.

Send flowers to the Starkey family.