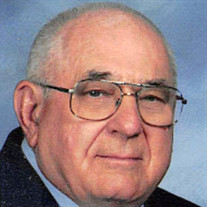 Norman Harley Hetzel, 87, of Liberal, KS. Left to be with his Lord and Savior, Wednesday, September 4, 2019 at Wheatridge Park Care Center, Liberal, KS. He was born January 8, 1932 at Quinter, KS, to Harald and Ella (Cooper) Hetzel. He graduated from Collyer High School in 1950. After five months of Business School he started working for Missouri Pacific Railroads, after one year joined the Army for two years, serving one year in Korea, with the Rank of Corporal. Returning back he worked for Missouri Pacific Railroad the next twenty eight years as an Agent Telegrapher. Then in 1982 merged with Union Pacific Railroad and retired in 1993 with 42 ½ years with the two Railroads. After retirement he started driving a School Bus for Greeley County Schools for the next nine years. His passion was playing pool and gardening. In 1959 he married Ethel Mullen at LaCrosse, KS. To this union Two Daughters were Born, Melinda Jane & Sonya Sue, a Granddaughter & Five Grandsons. He worked for the Union Pacific Railroad and the Missouri Pacific Railroad, as a Telegrapher operator. He was a member of the Masonic Lodge, and was a member of the Tribune United Methodist Church which he held various positons for many years. He served on the City Council in Tribune for over ten years. He is preceded in death by his parents, Harald & Ella, infant granddaughter, Josie, and a grandson, Jacob. Norman is survived by his wife Ethel of Liberal, daughters Melinda & Michael Haist, of Conway Springs KS, Sonya & Dr. Curtis Miller of Liberal, KS. He also is survived by a brother Eldon (Beverly) Hetzel. Granddaughter, Mckenzie Miller, Grandsons Justin Haist, Logan & Blake Miller. Cremation has taken place and Graveside service will be 11:00 AM Mountain Daylight Time Saturday, October 5, 2019 in Greely County Cemetery in Tribune, KS, with Pastor Robert Selvakvmar Officiating. Military Honors will be by the United States Army. A memorial has been established to the United Methodist Church, Tribune, KS. Please make checks payable to the United Methodist Church of Tribune. Memorials may be mailed to Brenneman Funeral Home 1212 W. 2nd St. Liberal, KS 67901 To send the family a condolence please visit www.brennemanfuneralhome.com

Norman Harley Hetzel, 87, of Liberal, KS. Left to be with his Lord and Savior, Wednesday, September 4, 2019 at Wheatridge Park Care Center, Liberal, KS. He was born January 8, 1932 at Quinter, KS, to Harald and Ella (Cooper) Hetzel. He graduated... View Obituary & Service Information

The family of Norman Harley Hetzel created this Life Tributes page to make it easy to share your memories.

Send flowers to the Hetzel family.