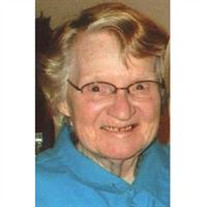 Opal Smith, 84, died March 1, 2016 at Southwest Medical Center in Liberal, KS. Born on March 11, 1931 at Leedey, OK, Norma Opal Vaughn was the daughter of Willie S. and Gladys E. (Foster) Vaughn. She was a 1949 graduate of Liberal High School. In 1950, she began a 29 year career with Bell Telephone as a telephone operator and switch board connector. She later worked for National Beef Packing Co. as a trimmer for 22 years. She was a dedicated member of Fellowship Baptist Church. She loved being a Mother and was very self sacrificing always giving to others. Opal loved to walk at both the SCCC Wellness Center and at Southwest Medical Center. She was a member of the 5,000 mi walker club. She would be greeted by many people and students and always remembered their names.On February 5, 1956, she married Lawrence James Smith at Clayton, NM. He died just six months ago on Sept. 5, 2015.She is survived by one daughter, Brenda Cordova and husband Herman of Liberal, KS; a sister, Bette Penner of Fairview, OK and two grandchildren, Anthony Cordova of Ft. Worth, TX and Stephanie Cordova of Dallas, TX.She was preceded in death by three brothers, Lester Vaughn, Oscar Vaughn, James Vaughn and a sister, Carolyn Warren.Funeral Service will be 2:00 PM Saturday, March 5, 2016 at Fellowship Baptist Church in Liberal with Pastor Bill Prater presiding. Burial will follow at Liberal Cemetery.Visitation will be Noon – 8 PM Friday at Brenneman Funeral Home.Memorial Contributions may be given to the Opal Smith Memorial Fund in care of Brenneman Funeral Home 1212 W. 2nd Liberal, KS 67901.

The family of Opal Smith created this Life Tributes page to make it easy to share your memories.

Send flowers to the Smith family.