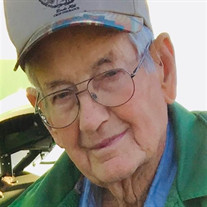 Paul F. Blaser, age 93, passed away at his home in rural Tyrone, Oklahoma on Tuesday, April 20, 2021 surrounded by his family. Paul was born to Jacob Frederick Blaser and Marie Antionette “Nettie” (Reuszer) Blaser on May 11, 1927 in Rosendale, Andrew County, Missouri. He was the youngest of four children. He had three sisters: Gertrude, Naomi and Mildred. The family moved from Missouri when Paul was young and settled outside Clayton, New Mexico. Paul attended 11 years of school at Clayton. During his junior year of high school he relocated to the Adams, Oklahoma area where he began his farming and ranching career. He graduated from Adams High School in 1945. From a young age Paul exhibited a very strong work ethic and during his school years, he held many jobs including grocery delivery and farm equipment delivery. One of his most memorable jobs was at a feed store in Clayton where he fulfilled many roles including preparing cattle hides for shipment, bagging and delivering coal to customers, and delivering feed and hay to ranchers. Starting in 6th grade he spent summers helping his uncle with his farming operation. As a young adult he was employed with Beech Aircraft in Liberal for four years making wing parts for the Beech T-33 airplane. He began attending the Union Center Methodist Church, with his relatives, when he was 10 years old and continued his attendance the remainder of his life. He was baptized in the Beaver River at age 17 and became a member of the church where he served as song leader for many years as well as Treasurer on the Church Board and the Union Center Cemetery Committee. He served several years on the Adams School Board of Education. He married Alberta Buxton on December 25, 1954 at her home in rural Turpin, Oklahoma. They established their home east of Adams where they raised their five children: Terry, Paul Dean, Deborah, Larry, and April. Soon after, Paul’s parents relocated from Clayton to the Adams area and lived near Paul and his family. Paul was a loving and supportive son to his parents during their lifetime. Paul had a natural tenacity for business. He bought his first quarter of land at the age of 17. He was a part of the American Agriculture Movement and group of farmers that protested in Washington, D.C. in the late 1970’s. Paul initially got his start in the farming business by raising broomcorn which he did for many years. He grew his farming business throughout the years with a lot of hard work, determination, and help from his family and dear employees, all of whom were an extension of his family. He inspired his children to have this same type of desire to love the land, remain honest, and be proud of their accomplishments. He never missed a harvest and at the age of 93 still drove the combine during both wheat and milo harvest even driving the crew to and from the harvest field each day. Besides working the land Paul had many other loves. The Blaser’s enjoyed having people over to their home for lunch after church followed by an afternoon of competitive card games. He enjoyed taking annual family camping trips to New Mexico and Colorado, where he initiated many long hikes up abandoned logging roads, enjoyed meeting new people, and simply found pleasure in sitting with his family by the campfire and creek. Occasional trips were also made to other areas to see landmarks such as the Grand Canyon, Mount Rushmore, South Dakota Badlands, New Jersey to visit his sister Mildred, Colorado to visit his cousin Treva, and others. Paul was an avid reader and especially enjoyed reading about history and the great depression which he had lived through. He is preceded in death by his parents and his sisters: Gertrude Blaser, Naomi Tedford of Liberal, and Mildred Fry of Matawan, New Jersey. He is survived by: Alberta, Terry and Gloria of Liberal, Paul Dean and Karina of Turpin, Larry of Tyrone, and daughters Deborah Blaser of Cordell and April and Tim Neal of Gardner, KS; ten grandchildren: Tenyse, Brandon, Jordan, Whitney Shae, Skylar, Tylar, Christopher, Dakota, Amylia, and Amanda; thirteen great-grandchildren; two nieces; one nephew; and a special cousin, who is like a sister, Treva Reuszer-Hancock of Arvada, CO. In lieu of flowers, please donate to the Union Center Cemetery Fund or the Union Center Methodist Church, in care of Hornung Family Funeral Home, 1212 West 2nd ST, Liberal, KS 67901. Paul had many blood transfusions toward the end of his life. Please donate blood at your local blood bank in memory of Paul F. Blaser. Cremation has taken place. Friends are welcome to join the family for a celebration of Paul’s life at Union Center Cemetery, Adams, OK, on May 1, 2021 at 11:00 a.m.

The family of Paul F. Blaser created this Life Tributes page to make it easy to share your memories.

Send flowers to the Blaser family.