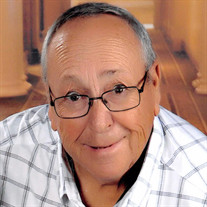 David “Pete” Ronald Hall, 72, died Friday, July 27, 2018 at his home in Liberal, KS. He was born on January 23, 1946 in Pratt, KS, the son of Leo Johnny and Opal Faye (Lambert) Hall. He attended Liberal High School, where he graduated in 1964. On June 18, 1966, he married Virginia Ellen Hardin in Liberal. She survives. David worked BP Amaco as a maintenance foreman, Pete’s Bargain Warehouse where he was an owner and operator, the City of Liberal, where he was bus driver, M&N Welding where he was a welder and for Midwest Machine Shop where he was a deliveryman. Pete enjoyed hunting, fishing, camping and the outdoors. He also loved cars, music and spending time with his family. Survivors include: 1 son Jeffery Hall and his wife Kayla Colorado Springs, CO 1 daughter Christina “Tina” Everett Liberal, KS 2 Sisters Leona Macias and her husband William Colorado Springs, CO Patsy Shuster Amarillo, TX 4 Grandchildren Landry Mastellar, Lathan Mastellar, Brandon Hall, and Lane Everett. 1 great grandchild Brayden Hall David was preceded in death by his parents. Memorial Services will be 10:30am Tuesday, July 31, at the Emmanuel Southern Baptist Church, with pastor Kelly Gindlesberger presideng. Flowers may be sent in care of the Brenneman Funeral Home 1212 W. 2nd Liberal, KS 67901. Condolences may be sent to the family at www.brennemanfuneralhome.com

The family of Pete Hall created this Life Tributes page to make it easy to share your memories.

Send flowers to the Hall family.