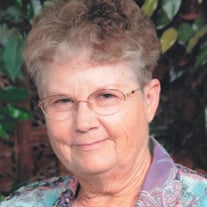 Phyllis Kaye Thomas of Liberal passed away Thursday, May 27, 2021 at Pioneer Manor in Hugoton, Kansas. She was 75 years old. She was born to Frank Jr and LaVern Janice (Gregg) Thomas on April 19, 1946 in Liberal, Kansas. She was a member of Bethel Friends Church of rural Hugoton, and later Liberal Friends Church. Phyllis graduated from Hugoton High School in 1964. She attended Fort Hays University where she met Darrell Mohr. They married in 1966. They operated a Gambles Furniture Store in Lawrence, Kansas for a few years, then moved to Freeport, Illinois to manage a furniture store. They moved back to Liberal, Kansas in 1974 with their two young boys in tow. Phyllis worked as secretary for Clingan Tires for several years. She later worked at SW Medical Center in medical records. Phyllis and Darrell divorced in 1975. She married Larry Rau in 1977. Phyllis continued her education, earning a degree in Psychology. She worked at Southwest Guidance Center for a few years, then retired. Phyllis’s greatest joy in later years was her dog, Sophie and her cat, Sammy. Phyllis is survived by her mother, LaVern Thomas, two sons, Richard Charles Mohr and Michael Shawn Mohr and wife Christine all of Colorado Springs, Colorado Two brothers, Robert F. Thomas and wife Marigail, and Ronald D. Thomas and wife Martha, all of Hugoton. Three Grandchildren, Krissa Mohr of Alabama, Ashlynn McCall (Rico) of Colorado Springs, Colorado, and Caden Mohr of Wichita, Kansas Two Great Grandchildren, Adleigh and Trey McCall of Colorado Springs, Colorado and many nephews and nieces. She was preceded in death by her husband, Larry Rau, her father, Frank Jr. Thomas and grandparents, Robert and Edna Gregg and Frank Thomas and Mary (Thomas) James. A Graveside service at Restlawn Memorial Gardens for the immediate family is being planned. No Viewing will be scheduled. Memorial donations suggested to Liberal Friends Church or Liberal Animal Shelter in care of Hornung Family Funeral Home 1212 W. 2nd Street Liberal, Kansas. Condolences may be sent to the family at www.hornungfuneralhome.com

Phyllis Kaye Thomas of Liberal passed away Thursday, May 27, 2021 at Pioneer Manor in Hugoton, Kansas. She was 75 years old. She was born to Frank Jr and LaVern Janice (Gregg) Thomas on April 19, 1946 in Liberal, Kansas. She was a member of... View Obituary & Service Information

The family of Phyllis Kaye Thomas created this Life Tributes page to make it easy to share your memories.

Phyllis Kaye Thomas of Liberal passed away Thursday, May 27,...

Send flowers to the Thomas family.