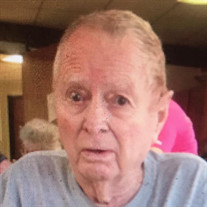 Ralph Lavon Hitchcock, age 85, died April 28, 2018 at Minneola Long Term Care Unit in Minneola, KS. He was born May 25, 1932 in Haviland, KS, the son of Story and Jane Hitchcock. He graduated from Haviland High School in 1950. On August 14, 1953 he married Mary L. Reed in Dodge City, KS. She died June 28, 1993. He served in the U. S. Army from 1953 to 1955, during the Korean War. He served as a Reserve Police Officer for the Liberal Police Department. He was a supervisor in the Gas Control Department for Panhandle Eastern Pipeline Company for 32 ½ years, retiring in 1987. He was self-employed in the construction industry, plumbing industry, farming and trucking industry. He enjoyed the mountains, fishing and spending time with his family and grandchildren. Survivors include: 1 Daughter Rhonda Wiens and husband Spencer Meade, KS 3 Grandchildren, Brady Wiens and wife Callie, Kendall Moser and husband Bryan, Stacey Hitchcock and Fiancé Mellisa Webb and 6 Great Grandchildren Jackson and Hayden Moser, Ember and Destry Wiens and Trever and Blake Hitchcock. He was preceded in death by his parents, wife Mary L. Hitchcock and 2 sons Duane and Jason Hitchcock and I Sister Mary Katherine McNamara. A public graveside services will be held at 2:00 P.M., Tuesday, May 1, 2018 in the Liberal Cemetery, Liberal, KS with Pastor Erin Rush, of the Emmanuel Southern Baptist Church, Liberal, KS presiding. Military Honors will be presented by the Liberal American Legion Post #80. There will be no public viewing or visitation. Memorial contributions may be sent to the Minneola Long Term Care Unit in care of the Brenneman Funeral Home 1212 W. 2nd Liberal, KS 67901.

The family of Ralph Lavon Hitchcock created this Life Tributes page to make it easy to share your memories.

Send flowers to the Hitchcock family.