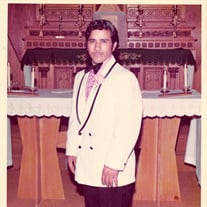 Raul Franco, age 72, died March 30, 2018 at his residence in Liberal, KS. He was born December 1, 1945 in Delicias, Chihuahua, Mexico the son of Francisco Franco Luevanos and Vicenta Rocha (Arzaga). He was a loving father to his children and... View Obituary & Service Information

The family of Raul Franco created this Life Tributes page to make it easy to share your memories.

Send flowers to the Franco family.