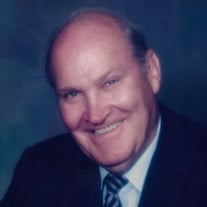 Rolland Jay “Pat” Patrick, 97, died Tuesday, August 16, 2022, at Wheatridge Park Care Center in Liberal, Kansas. He was born December 14, 1924, to Oscar Loyd and Fleda (Wooster) Patrick in Oilton, Oklahoma. Pat received his high school education at Saint Jo (Texas) High School. He joined the United States Marine Corps in 1941. He fought in the Pacific Theater during WWII and fought in the battles of Guadalcanal, Tulagi, Saipan, Tarawa, and Tinian. He was a proud member of the 2nd Marine Division and the Forgotten Battalion. On October 7, 1944, he married the love of his life, Nina Faye Hammer, in Marietta, Oklahoma and started their beautiful family. Pat worked as a driller for Arrow Drilling and a field gauger for Standard Oil Company until the couple moved to Liberal, Kansas in 1957. Pat and Nina built several successful businesses together including Patrick Well Service, NRG Drilling, and RJ Patrick Operating Company. Pat was always highly active in his community and generous with his time, donating countless hours to a variety of local and civic organizations. He was a Mason and a Little League baseball coach. He was a member of the First Presbyterian Church, Society of Petroleum Engineers, Elks, Liberal Rotary Club, KIOGA, AOSC, and the Liberal Country Club. His passion for helping to improve his community and make a difference in so many lives through educational opportunities was unparalleled. He will truly be missed by all those whose lives he has touched. Pat had many loves but none more so than his family and friends. He was often the host of many social events, formal and impromptu, where he would raise a glass of wine or the good Irish whiskey, play music from his Wurlitzer jukebox or the player piano which often led to hours of singalongs and dancing. He loved a good theme or costume party and often invited people to pick a hat from the hat collection and join the conversation anytime people came to visit. He could talk for hours about his time as a Marine and loved to share details about his fellow members of the Forgotten Battalion. In addition, he would entertain kids and adults with a variety of “tall tales” which often included stories about his time and adventures riding the range with Gene Autry, Roy Rogers and countless other famous old Hollywood cowboys. Pat’s ability to tell a good joke, make you smile and leave you laughing was a true calling card of his love for life. Pat is survived by his son-in-law, Paul Feldman of The Woodlands, TX; Grandchildren Jamie Williams and husband Brandon of Liberal, Kansas, Gina Rotolo of Palm Spring, California, and Toni Feldman of Blue Springs, Missouri; great grandchildren Sean Patrick Titus of Manhattan, Kansas, and Caleb Patrick Edward Feldman of The Woodlands, Texas. He was preceded in death by his wife, Nina; parents Oscar and Fleda (Wooster) Patrick; daughters Jayn (Patrick) Berry, and Mary Jo (Patrick) Feldman; brother, Loyd Patrick, and sisters Mildred Rozypal and Evelyn Madonna. Visitation will be at the Hornung Family Funeral Home on Tuesday, August 23 2022, from 2-7pm. The family will be present to receive friends from 5-7pm. Funeral services will be Wednesday, August 24, 2022, at 10am at the First Presbyterian Church, 1551 N. Western, Liberal, Kansas with Rev. Jeff Mitchell presiding. Burial will follow at Liberal Cemetery. Memorial donations are suggested to Seward County Community College, Sandy Lowe Medical Laboratory Technology Scholarship or the Seward County Community College Foundation for Allied Health in care of Hornung Family Funeral Home, 1212 W. 2nd Street, Liberal, Kansas. Condolences may be sent to the family at www.hornungfuneralhome.com. Hornung Family Funeral Home, 1212 W. 2nd Street, Liberal, Kansas.
To order memorial trees or send flowers to the family in memory of Rolland Jay "Pat" Patrick, please visit our flower store.