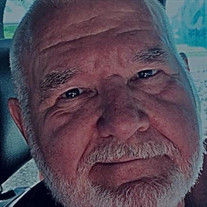 Ronald Wayne Clodfelter, age 75, of Liberal Kansas, died Wednesday June 10, 2020, at Harry Hynes Memorial Hospice in Wichita, Kansas. He was born October 23, 1943 in Wichita, Kansas, the son Wayne, and Evelyn (Smith) Clodfelter. He attended High School in Liberal, Kansas, graduating in 1961. In 1963, he joined the U.S. Navy and served until 1971 Ron retired from his own business, Four Seasons Heating and Air Conditioning, in Liberal Kansas. Even after retirement he continued to work for Peoples Gas and looked after his friends and families HVAC systems. Ron loved to keep busy. He enjoyed rebuilding 1966 & 1967 Chevy II Nova’s, doing woodworking projects, target shooting and hunting. He was immersed in extending his winning streak in solitaire on his tablet. He was the beloved father of Robert W. Clodfelter and his wife Traci of Burleson, Texas, and Rodney W. Clodfelter and his wife Kelly of Olathe, Kansas Ron was the proud Grandfather of 3 Grandchildren, Britta (Randy) Marshall, Blake (Emily) Clodfelter, Noah Clodfelter, and 3 Great Grandchildren, Remington Marshall, Rhett Marshall, and Grayson Clodfelter. He was preceded in death by his Parents, Wayne, and Evelyn (Smith) Clodfelter, Sister, Glenna Myrick, and her husband Gene also Granddaughter, Kennedy Clodfelter. Visitation will be Sunday, June 14, from 1:00 PM to 4:00 PM at the Brenneman Hornung Funeral Home. A Graveside Service will be Monday, June 15, at 10:30 AM at the Restlawn Cemetery with Pastor Greg Turpin Presiding. Attendance at services will follow CDC guidelines and State requirements for social distancing. This is for safety and the best interest of everyone’s health; we encourage use of social media to offer condolences and support to the family. Per family wishes, the graveside service will be available on Facebook live. Memorial contributions may be sent to the American Heart Association or the American Cancer Society, in care of the Brenneman Hornung Family Funeral Home 1212 W. 2nd Liberal, KS 67901. Condolences may be sent to the family at wwwHornungfuneralhome.com

The family of Ronald Wayne Clodfelter created this Life Tributes page to make it easy to share your memories.

Send flowers to the Clodfelter family.