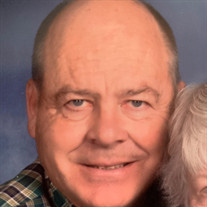 It is with great sadness that the family of Ronald Wayne Deckert announces his passing after a brief illness, on Tuesday, January 21, 2020, at the age of 65 years. Ron was born February 14, 1954. He will be fondly remembered by his beloved wife, Sharon Deckert of Liberal, and his daughters Brenna Deckert of Stockholm, Sweden and Katelyn (Chet Egan) Deckert of Kansas City, and his stepson James (Sarah) Kennedy of Dallas, Texas. Ron was part of a big family, whose surviving members are John (Carla) Deckert of Topeka, Kansas; Ruth Ann (David) Urban of Soldotna, Alaska; Don (Mary) Deckert of Diberville, Mississippi; and Diane (Keith) Connally of Olathe, Kansas. Ron was also blessed to have been taken into the McKinney family of Weskan, Kansas after the untimely passing of his parents, and is so is further survived by his adoptive father Robert McKinney of Weskan; and adoptive brothers Terry (Nancy) McKinney of Columbia, Missouri; Bryan (Deanne) McKinney and Wayne (Trudi) McKinney of Weskan. Ron was preceded in death by his parents John and Ruth (Skelton) Deckert; brother Joe (Kathy) Deckert; and adoptive mother Pauline McKinney. Ron was happiest on the back of a motorcycle or a four-wheeler, preferably riding the trails in the Colorado mountains or sand dunes in Beaver, Oklahoma. He could fix just about anything with a motor, and often took in mechanic projects just for fun. He was a star athlete in high school and college, playing basketball, football, and running track for Weskan Schools and setting records in track and cross country at Garden City Community College. He enjoyed watching KU and SCCC Saints basketball, flying model airplanes, and solving puzzles. Ron never met a stranger in his life, and so collected a large and varied group of friends over the years. He was quick with a joke and loved being the funniest person in the room. Ron was a proud life-long resident of western of Kansas, where he dedicated his working career to public service and improving the lives of others. After graduating from Garden City Community College and Wichita State University, he honorably served in Ulysses as a Police Sergeant for 16 years, before going to work at Southwest Guidance Center in Liberal as a Case Manager. Ron raised his two daughters in southwest Kansas with his first wife, Jerry Jo (Tilson) Deckert of Ulysses, who remained his close friend. He was proud of the home he made in Liberal with this dear wife, Sharon, and their little dog Pixie. He was a kid at heart, and always made special connections with the little ones in his life. He was an active member, Sunday School teacher, and official grass-cutter at the South Church of God in Liberal, Kansas. A celebration of Ron’s life will be held on Saturday, January 25, 2020 at 10:00 a.m., at the South Church of God, 635 S Washington Ave, Liberal, Kansas. Interment will follow at 3:00pm at the cemetery in Larned, Kansas. A viewing will be held at Hornung Family Funeral Home Friday, January 24, from 12pm to 8pm, with the family present to greet friends from 5pm to 7pm. In lieu of flowers, those who so desire may make memorial donations in memory of Ron to the Southwest Guidance Centre Foundation in Liberal, Kansas, in care of Brenneman Hornung Funeral Home, 1212 W 2nd St., Liberal, KS 67901.

It is with great sadness that the family of Ronald Wayne Deckert announces his passing after a brief illness, on Tuesday, January 21, 2020, at the age of 65 years. Ron was born February 14, 1954. He will be fondly remembered by his beloved... View Obituary & Service Information

The family of Ronald Wayne Deckert created this Life Tributes page to make it easy to share your memories.

It is with great sadness that the family of Ronald Wayne Deckert...

Send flowers to the Deckert family.