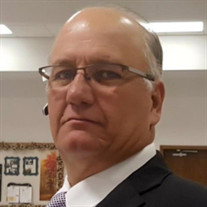 Sammy Joe Henry, died Friday, June 26, 2020 in Cheyenne County, Colorado. He was born September 2, 1960 in Kansas City, Kansas. He was so proud when he got his GED from the Colvin Adult Learning Center with Seward County Community College in 2015. He was longtime resident of Liberal, Kansas and owned Area Wide Pest Control. He was a member of the Apostolic Life Tabernacle Church. On January 28, 1994 he married Davina Casias in Liberal, Kansas. She survives Joe had many hobbies, he enjoyed talking, he was a people person and always loved sharing stories and bible verses he could even be very ornery when he wanted too. He also enjoyed hunting, fishing, and being a bible study teacher. Survivors include. Daughter: Angela Henry Starkey of Tyler, Texas Sons: Mika Apodaca of Albuquerque, New Mexico Joshua Apodaca of Albuquerque, New Mexico Caleb Henry of Canyon, Texas Brothers: Kenny Sikorski of Kansas City, Kansas Billy Sikorski of Kansas City, Kansas 6 grandchildren Desiree McAllister Starkey, Brianna Nichole Starkey, Chandler Starkey, Daniel Aiden Starkey, Jasiah Ray Henry Preceded in death by Joshua Henry, Maki Henry, Nasiah Henry, Gene Henry, Grandmother Dorothy Butters, and sister Dorothy “Dottie” Henry Funeral service will be held at Apostolic Life Tabernacle Church on Tuesday, July 7, 2020 at 10:00AM with Elder Audie McCuistion and Pastor John Sevedge presiding. Per the request of the family, Facebook Live will be used for anyone not comfortable attending due to Covid-19. If you or anyone in your family has been ill or exposed to Covid-19, please utlize Facebook in lieu of attending. Visitation time will be 9am to 8pm Monday, July 6, 2020 with the family present to greet friends from 5 to 8 pm at Brenneman-Hornung Family Funeral Home at 1212 W. 2nd Street Liberal, Kansas, 67901. Memorial Contributions may be sent to Brenneman - Hornung Family Funeral Home for Joe’s Final Expenses. Condolences may be sent to the family at www.hornungfuneralhome.com

Sammy Joe Henry, died Friday, June 26, 2020 in Cheyenne County, Colorado. He was born September 2, 1960 in Kansas City, Kansas. He was so proud when he got his GED from the Colvin Adult Learning Center with Seward County Community College in... View Obituary & Service Information

The family of Sammy Joe Henry created this Life Tributes page to make it easy to share your memories.

Send flowers to the Henry family.