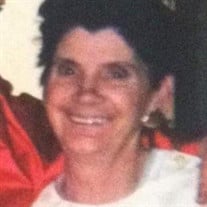 Thelma Faye Dowdy, age 83, died April 26, 2021 at Wheatridge Park Care Center in Liberal, Kansas. She was born on October 6, 1937 the daughter of John Vassar and Martha Leola Galbert in Vernon, Texas. Thelma received most of her education in Liberal, Kansas. She was employed as a waitress and an over the road truck driver in her younger years. Thelma was a loving and devoted mother of one son, Russell Roberts and one daughter, Toye Faye Allen. She enjoyed going to the casino and spending time with her children and grandchildren. In 1987 Thelma married her best friend and love, Earnest Dowdy in Guymon, Oklahoma. She was well known for making the best coconut and caramel pies. With grateful hearts we remember the ways in which her long life has been a blessing to us Survived by: Her son, Russell Roberts and his wife, Leesa of Enid Oklahoma Six grandchildren, Chassy Allen, Misty Allen, Joseph Allen, Stephaine Roberts, Corey Roberts and Cody Roberts Seven great grandchildren, Javon and Jaden Allen, Damien Quinones, Makyla Roberts, Kalen Christin, Kyle Morrow and Isiah Allen Three great great grandchildren and many nieces and nephews. Thelma was preceded in death by both her parents, John and Leola Vassar, her daughter, Toye Faye Allen, her husband Earnest Dowdy, three brothers, Bill Vassar, Pete Hammons and Charlie Vassar, and both her sisters, Roberta Wallace and JoAnna Monroe. A graveside service will be at a later date in Tipton, Oklahoma. Memorial donations suggested to American Lung Association in care of Hornung Family Funeral Home. Condolences may be sent to the family at www.hornungfuneralhome.com

The family of Thelma Faye Dowdy created this Life Tributes page to make it easy to share your memories.

Send flowers to the Dowdy family.